Memorial donations are suggested to any charity of the donor’s choice and will be accepted through the funeral home. 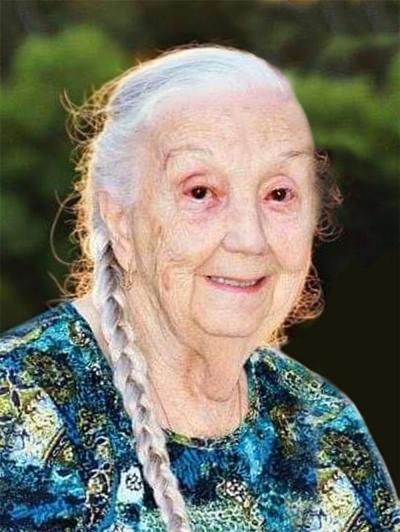 Marjorie E. Thompson, age 96, of Clay City, Illinois, passed away Thursday evening, July 28, 2022, at her home surrounded by her children.

She was born August 1, 1925, in Pisgah, the daughter of Parmer Earl and Anna Marie (Dennis) Sanders.  She was united in marriage to R.L. Thompson on September 10, 1945, in Holly Grove, Arkansas and together they shared 53 wedding anniversaries until his death April 4, 1999.

Marjorie was a schoolteacher in a one room school in her early years and later a girl scout leader.  She enjoyed attending auctions, collecting Fenton glass, watching birds, and her black rabbit and fish.  She was an enthusiastic storyteller and could talk for hours reminiscing with family and friends.  Marjorie worked hard to have hot meals delivered to the farm and hay hands and also operated a chicken house to help provide for her family.  She was of the Christian faith.

A funeral ceremony will be held at 10 a.m. Thursday, August 4, 2022, at Frank & Bright Funeral Home in Flora.  Interment will follow in Rusk Cemetery, Flora.  Visitation will be 6-8 p.m. Wednesday evening at the funeral home.  Memorial donations are suggested to any charity of the donor’s choice and will be accepted through the funeral home.

Tom and Cheryl, my condolences to you at the passing of your Mom. I know you will miss her, but take comfort in knowing that she is reunited with the love of her life. You were blessed to have her as your Mom, and she was blessed to have such a caring and loving son and daughter-in-law. Cherish your memories as they will warm your heart and bring a smile to your face for her having had a life well lived. Love you guys. ❤️

we wish to send our condolences to her family. We pray that God will comfort each of you in his loving way. R.I.P. Marjorie.

I am so sorry for the loss of this wonderful, sweet, beautiful woman. Cherish your memories ❤, love and prayers for all. Rest in sweet peace Marjorie🙏

Deb, Gina and rest of your family, So sorry for your loss. She was an angel, loved by all. May God bless and keep you all and give you comfort during this time. Sending lots of hugs and prayers for all of you. Keeping you all in our thoughts and prayers.🙏🙏🙏

David, Jencie, Tom and Cheryl: Our deepest sympathies to you in your loss. Prayers for you and your families.

Remembering your family in prayer. Hold to the wonderful memories . . . knowing that Christians never say goodbye.

My deepest condolences to the family on your loss. My thoughts and prayers to all of you.

So sorry for your loss of a beautiful lady...

Sympathy is extended to The Family. Sorry for Your Loss. An Outstanding Member of America's Greatest Generation has passed.

So sorry to hear of Marjorie’s passing. A very special lady to so many people.

Wonderful lady, she'll be missed by all .So sorry for your loss.

I offer my condolences and prayers to the entire family, at the time of grief and loss of a loved one.

My thoughts and prayers go out to all of Margorie's family. May God bless you with peace and comfort in the days ahead.

I love you grandma rest in paradise ❤️

My thoughts and prayers is for David, Deb, Becky, Gina, and Tom. To all of the spouses and all the grandkids/great grandkids. Marjorie was a sweet special lady that I was fortunate to grow up around this family. Prayers to all of you.

Deb, we were so sorry to hear of the passing of your Mom. You and Don will be in our thoughts and prayers.

Thoughts and prayers to you all.

Tom and Athena...I am so sorry for your loss. Hold on to those precious memories. Praying for God's comfort to you all during this time.

The Walsh Family/stephen and Lynn Wilfong

Jencie, I never had the pleasure of meeting your mother. It sounds like she was a wonderful lady. Please accept our sincere sympathy. The loss of a mother is like no other.

So very sorry for your loss...my thoughts and prayers are with the family... (HUGS TO YOU,GINA !!!! )

Our thoughts and prayers go out to all of you.

So sorry for your loss . You and your family are in our prayers.

So sorry for your families loss, hugs and prayers.

Sending healing prayers and comfort during this difficult time. Grandma Marj was an incredible woman and she will be missed.

So sorry to hear this. She was always a delight to talk to . Loved hearing her stories. Prayers and hugs to all the family

My sincere sympathy to all of the family. You are in my prayers.

We Are so very sorry for your loss Condolences from our family to yours!!

What a wonderful woman. My parents were very good friends. She raised an awesome family and was one of a good kind. You will be missed by many. ❤️🙏

Sorry for the loss of your mother.

Gena, Jensie, Tom & families We are so sorry for your loss but your mom was one of the sweetest souls I've ever known. She lived a long life and must be in Heaven and knowing great peace with our God.

Tony and Dana Doty and Family