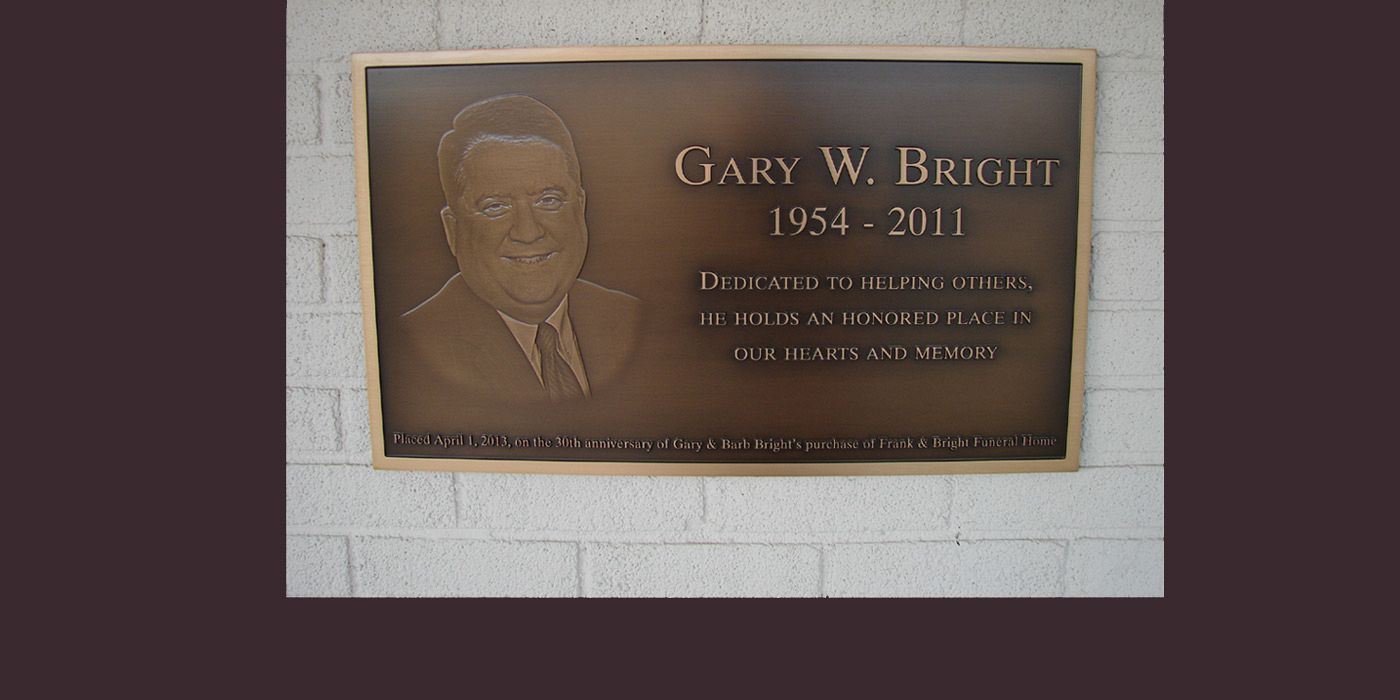 The following article was written by Lindell "Smitty" Smith and appears here as originally published in the Clay County Republican on Wednesday, June 29, 2011.

Clay County was left with a collective hole in its heart this past Saturday.

Gary Bright, who came to our community in 1983, ironically taking over the John T. Frank Funeral Home on April 1.  Page Two of today’s paper will contain Gary’s obituary, but Gary was so much more than words could or ever will be able to convey.

Visiting with Barb, Kim, Greg and Josh at Barnes Hospital in St. Louis was eye opening for someone who felt he was as close to Gary as I did.  The parade of people who came from everywhere just amazed me.  Gary’s hand stretched far beyond Clay County.

Gary, like so many adults is somebody I really met through his children, Greg and Kim.  I used to tease him about his lack of sports knowledge.  I got to know Gary a little more when Kim was part of our powerlifting family.  That was the first time I was a “victim” of his sense of humor.  We were competing in Henderson, Kentucky and I got sick (big time.)  Because of that, I would watch our athletes lift, call their next lift, then go back into the lobby of the motel and lay down.  When the meet ended, I returned to the couch and fell soundly asleep.  Mable woke me up later and on my right hip was one of Gary’s business cards.  He had tagged me like a deer.  Later he explained to me that it was so hard to get a body out of Kentucky, he thought it was best to go ahead and “mark” me.

Something that probably has gone unnoticed by some people is that Gary made the Mortuary Sciences cool.  Think about our area and the number of young people who have gone into the field of Mortuary Science.  Without thinking real hard, I can come up with probably more than a half dozen young men and women.  That’s probably way off the chart of the national average.  Why? Because of what I said before, Gary made it cool. I know as a kid and young adult, we had a variety of funeral homes serving Grafton, but I would have been hard pressed to have been able to identify any of those funeral home directors anywhere but at the funeral home and, if I had, it would have just been creepy.  Being a funeral director carried a creepy connotation.  That wasn’t the case with Gary.  Little kids, teenagers and young adults knew who Gary was and liked him.  When you not only pull off cool, but make it look as easy as Gary, you are in a league of your own.

Those of us who are older, it was Gary’s professionalism that was so impressive.  I’m not talking bad about anybody, but those of us who have reached the infamous “golden years,” Gary’s workmanship and his attitude drew us to him.  You only have one chance to look good in your coffin and Gary made more than a few people look good.

Gary was a Christian.  When Gary and Barb were without a church, they sat at home and listened—and paid attention—to the local services on the radio.  I know this because Gary would quite often tell me things our pastor had said, which I missed.  The last few months have been excellent for Gary and Barb in their walk because they found a new home in Orchardville.  Once again, they were able to dip into the collective church bucket of water and drink deeply of Christ’s refreshing word.

When you look at the list of Gary’s clubs and organizations on Page Two, it only tells part of the story.  Gary gave above and beyond the clubs.  More than a few people have been the recipient of an empty check at a restaurant because Gary loved “paying it forward.”  And, it wasn’t limited to Clay County.  Gary never thought twice about buying a meal for a serviceman he didn’t know.  And it wasn’t uncommon for him to leave before the person ever knew the bill was paid.

On a personal note; I was one of two children born to my parents and the second child was a sister.  I never had a brother, but I felt Gary filled that void for me.  Actually, I have been fortunate enough to find several, non-blood brothers since moving to Clay County.  Gary was my rock and my solace.  I was comfortable talking to Gary and Barb about anything, knowing they would offer comforting feedback and always left them feeling better.

Gary and Barb loved Clay County.  They might be considered newcomers to our community, but their collective hand was always stretched out in a giving, loving fashion.  Don’t lose sight of the fact that, while we as a community have lost the one constant in our life, “Gary will bury me.”  Barb has lost her husband and Greg and Kim have lost their father.  We all hurt with Gary’s passing, but none of us can fathom their loss.

The next few days are going to be tough on all of us and it makes it kind of ironic that Gary and Barb had Dr. Alan Wolfelt in town to speak on “companioning the mourner.”  Gary wouldn’t want us to mourn his passing.  Gary was a Christian and as I told somebody over the weekend—if Gary and my Mom didn’t make it to Heaven, I might as well quit trying.  Gary has gone home.  His pain is gone.

Those of us left behind need to understand we aren’t intelligent enough to understand God’s plan.  We need to cling to Gary’s memory and be a little more compassionate to each other.

And, just remember the man who will be missed, but hopefully never forgotten by his adopted home.