Memorial donations are suggested to Flora First United Methodist Church and will be accepted through the funeral home. 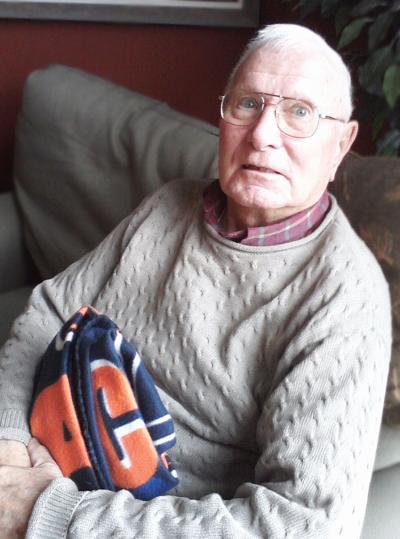 
Private family services will be held.

He was born April 30, 1932, in Bible Grove Township, the son of Oscar and Laurel (Webster) Childers.  He was united in marriage to Beverly Jean Davis on October 17, 1954, at the Flora First Methodist Church and together they have shared 67 wedding anniversaries.

Bob was a 1950 graduate of Flora High School.  He attended Southern Illinois University in Carbondale studying agriculture while completing three years of college prior to being inducted in the Army.  He served as an MP in the Army from 1953-1955.  He loved the Lord and was a member of the Flora First United Methodist Church.  Bob had a love for farming and had worked in the fertilizer business for a number of years.  He had a great love of people and conversation, but above all he loved his family, cherishing time spent traveling with them.  Bob enjoyed playing dominoes, spending time outdoors, mushroom hunting, watching birds and squirrels, and fishing in his early years.  He also enjoyed watching sports and was an avid St. Louis Cardinal baseball fan.  He was a member of the Flora American Legion Post 14.

He was preceded in death by his parents; a brother: Charles Curtis Childers; and a sister: Norma Jane Henson.

Private family services will be held.  Interment in Elmwood Cemetery will take place with the presentation of military funeral honors.  Arrangements are by Frank & Bright Funeral Home in Flora.  Memorial donations are suggested to Flora First United Methodist Church and will be accepted through the funeral home.  To share a condolence or memory, visit: www.frankandbright.com

I am very sorry for your loss if there is anything I can do to help in any way just let me know. I dated Laura in the '70's and he and his wife always made me feel like part of the family. if you need somebody to talk to or a shoulder to cry on don't hesitate to call on me

Beverly I'm so sorry for the loss of Robert. I really enjoyed taking care of him. Hugs and prayers for you and the family. Jacquie Cooper

We are sorry for your loss.

Dear Beverly, Larry,Alice , Randy & all family. I'm so sorry for your loss. It's truly Heaven's gain. Now him & my brother Joe Robert can swap tales all they want.

Dad, you will be very much missed by me and Stuart and all my grandchildren. I'll always remember how you taught me to love the Lord and to love everyone. I was very sorry about your passing and I love you very much and will always treasure the times we traveled as a kid and all the talks we had when I was young. I am so sorry mom for your loss and I loved dad very much. Love, your daughter, Laura Mae P.S. I will always be the apple of his eye.

So sorry to hear of your father's passing. My prayers are with you all.

so sorry to hear about Bob. I remember the good times we had in lodge. Our thoughts and prayers are with you.

My sincere sympathy to all of the Childers family. May God wrap his loving arms around all of you!

To the Best Dad any daughter could ever pray for in life. Thank-you, Dad for all you have done for your family through the years. I feel blessed to have had you as my father on earth during my 66 years. I will always be your first daughter, child, and your Edie! Rest in Peace, Daddy!

Beverly sending sincere condolences for you and your family. Thoughts and prayers!

I am so sorry to hear and read this , I didn’t realize Bob was that bad off , so sad and my prayers are with you all . All of the class members up there will be able to have Sunday school now that the teachers there

It was a pleasure to spend time with him and Beverly. He would tell me how much he appreciated me being there to help him. He was always happy to get his coffee with cream and I loved watching him enjoy it. Thank you for allowing me into your home and making me feel a part of your family. He will definitely be missed.

Edith and Tracey so very sorry. My thoughts and prayers are for the family.

Bob was simply a wonderful, kind and gentle man. I got to know him well at FUMC Bible studies. Even visited his home to help with computer. May his soul rest in peace with his Father in Heaven.

Prayers & Sympathy to all the family!!

So sorry for the loss of your father. Prayers of comfort for your families.

Bob was one of my favorite customers at the post office. Always joking and just a happy person. Hugs and prayers going out to all his family, especially his wife.

I'm so sorry to hear of Bob's passing. I remember him as being a kind, upstanding Christian man as well as a caring dad and husband. May God's peace and comfort be abundant to all the family. You are in my prayers.

Please know that we are so sorry for your loss. Our thoughts are with the entire family.

To Bob’s family, we were so sorry to learn of Bob’s passing. He was such a friendly, caring and humble man. He was so proud of his family and all their accomplishments. Our sincere sympathy to Beverly and his family.

Bobby, So sorry for your loss. Your dad was a very kind man that always had a smile and a kind word for me when I would see him. I worked with him at the Clay County Rehab when he drove the bus there. When he found out that I had gone to school with you he was my friend for life. He will be missed.

Thinking of you all! Prayers of peace and comfort for you.