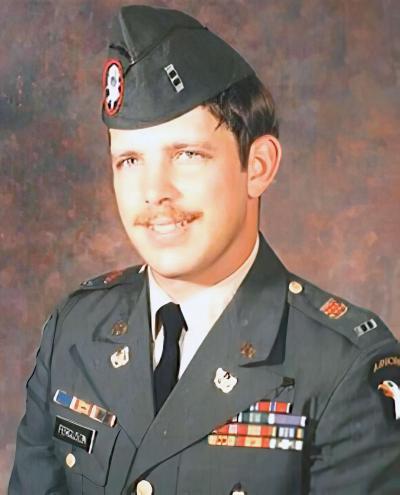 Burial:  Elmwood Cemetery in Flora with the presentation of military funeral honors

Jim was a 1985 graduate of Western Kentucky University, and served in the United States Army with the 101st Airborne Division and the 1st Cavalry Division. His military awards include the Distinguished Flying Cross, Bronze Star, and Purple Heart, among many other Individual Awards and Unit Awards. For three decades he was an Air Traffic Controller in Bowling Green, Kentucky, and Nashville, Tennessee. He was an Eagle Scout, Ham Radio operator, a member of Civil Air Patrol and an outdoorsman.

A visitation in Illinois will be 5 until 8 p.m. Monday, June 27, 2022, and 10 until 11 a.m. Tuesday, June 28, at Frank & Bright Funeral Home in Flora.  A funeral ceremony will begin at 11 a.m. Tuesday with burial to follow at Elmwood Cemetery in Flora with the presentation of military funeral honors.

I am so sorry for your loss. 🙏 Thinking of you all.

Prayers for family. Sorry for loss.

Chuck and Randy, sorry about loss of your brother. May his soul rest in eternal peace. Prayers for peace for all of you.

I went to school with Jim, nice guy. I'm pleased to see how much good he did with his life. Prayers of comfort to his family. Jane

Rest In Peace, Jimmie. Honored to have shared the cockpit of a Cobra with you at Ft. Campbell!

Jean and Ferguson Family: We are so sorry for your loss. Jim has been a friend since our school days. We’re so thankful for our last long visit with him. He had the stories and we enjoyed every one of them. Jim will be missed. Please accept our deepest sympathies and know that you’re in our prayers during this sad time. RIP Jim ❤️ You deserve it🇺🇸

Hearts are heavy today from the passing of a good man. May God bless Jim's family and friends, giving peace and comfort to all. Fly high, my friend, you've earned your eternal wings!

Jean and family. We are so sorry to hear that Jimmie had passed away. He was a great guy and I will miss all those long talks we had over the years both thru flying and Ham Radio. Semper Fi Sky soldier.

My sincere condolences to the family.

I remember Jim from our days at OCC. I also saw Jim at Hunter Army Airfield in Savannah, GA, while we were both stationed there. Sorry to learn of his passing.

Jean and family, we are so sorry for your loss. Prayers and hugs to each one. 💕💕

I am truly sorry for your loss of Jim!! He was my brother Dave's age, so I don't remember him very well!! But you all were apart of my growing up!! Rick and I are praying for you all!!!

Played 4 years of highschool football with Jimmy. Jimmy was offensive and deffensive guard. We could always depend on jimmy. He was dedicated , and serious . He left everything on the field. God bless Jimmy. My condolences to the family of Jimmy Ferguson.

I’m so sorry for your loss and sending hugs and prayers to you.

I was sorry and surprised to hear of Jims' passing. It caused me to stop and think back to the times we would go over and play ping pong in the basement of their house near the high school with Chuck Randy and Bob and that '56 Chevy too. He always seemed to be the most genuine All American guy.