Memorial donations are suggested to Christ’s Church of Flora and will be accepted though the funeral home. 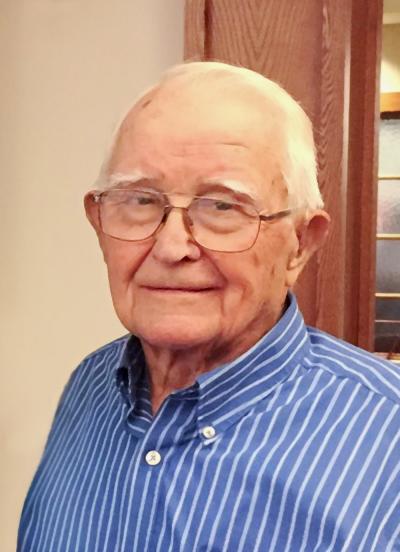 Earl was inducted into service in the U.S. Army at the end of World War II, and was stationed in Japan.  He began a long career with Halliburton beginning in 1950, and was the proprietor of Earl’s Gun Shop in Flora.  He was a member of the Flora American Legion and the NRA.  Earl enjoyed hunting, and kept a collection of vintage tractors over the years that he took great pride in spending time working on.

He was also preceded in death by a stepdaughter: Mary Eaton; and 4 sisters and 3 brothers.

A graveside ceremony will be held at 11 a.m. Friday, January 21, 2022, at Elmwood Cemetery in Flora with the presentation of military funeral honors.  Don Wallace will officiate.  Those attending are asked to arrive directly at the cemetery.  Arrangements are by Frank & Bright Funeral Home.  Memorial donations are suggested to Christ’s Church of Flora and will be accepted though the funeral home.  To share a condolence or memory, visit: www.frankandbright.com

Brenda and family, We loved Earl. He was a sweet and special guy. We will miss him but we know he is with the Lord You are in our thoughts and prayers! Love you.

Earl was a hard-working human being, very nice kind and considerate. Earl did some electrical work at our home, my condolences and prayers are with the entire Malone and Nicholson family.

I'm so very sorry Brenda. You are in my prayers. God bless. ❤

I am so sorry for your loss. He was a good man.

I am sorry for the loss of Mr. Earl. A lovely person, kind and gracious. He always asked about my father-in-law, Don Oakes. He referred to the good ole Halliburton days. He was a delight to be around. We have missed seeing him. Our condolences.

Earl was a wonderful friend, customer and man. He will be missed very much but the angels are singing !! Prayers for comfort….

I had the pleasure of working with Earl during our Halliburton careers. Earl never met a stranger, his smile and down home personality made him a person you wanted to be around. He was very talented on many subject’s. Electrical, firearms managing and supervising a large corporations inventory and make many friends along the way. My condolences to the family.

Dear Julie, Priscilla and Gary, Thinking of you at the loss of your Dad. Earl was a very nice man and kind and friendly to me as a kid living on Holly Lane. Rest In Peace Earl 🕊

Gary: I just saw the obituary on your dad and I am so very sorry for your loss. My thoughts and prayers will be with you and your family in the coming days.🙏

So Sorry for ur Loss! Prayers for the Family!!

RIP Earl. Remember you and the family from a long time ago.

A very nice man. Sorry for your loss.

Our condolences to family and friends of Earl. He was always so nice and pleasant.

So sorry to hear of Earl's passing.

Earl was a special friend to me. Witty and wise, Earl always could provide sage advice and had a way of getting directly to the truth of matters. He was kind and patient when I stumbled through gun trades and purchases with him. I always enjoyed visiting with Earl. To me, he will always be an extra Uncle that I was lucky enough to be blessed with. A good egg indeed!

Ruthie and I extend our deepest condolences to the family. We were blessed to have Earl as a member of the American Legion, and enjoyed visiting with him in past years. A very nice man.

Earl was a great guy he was always a family friend and part of the Halliburton family I can remember him and my dad trading electrical work for a gun. Always pleasant to visit with. My condolences

Earl will truly be missed. Always a very kind neighbor and would always stop and chat when our paths crossed. Prayers for strength and comfort to the family.

Sorry for your loss, Earl was a good man, always enjoyed talking to him. Prayers for the family.

Brenda I'm so sorry. Earl was a good man who always had a good sense of humor. He will be missed.

Brenda I thought so much of Earl and enjoyed our talks a GREAT guy enjoy talk to him and our friendship.Thoughts and PRAYERS for you and all the family also.

Julie, I'm so sorry to hear about the passing of your Dad. I'm sure it brings some comfort knowing he's reunited with your mom, but we're still never ready to let go. Asking God to wrap His loving arms of comfort around you & give you the peace that passes all understanding! Contact me if you ever want to talk! 🙏🤗

all your coffee drinking buddies