Memorial donations are suggested to Louisville First Baptist Church and will be accepted through the funeral home. 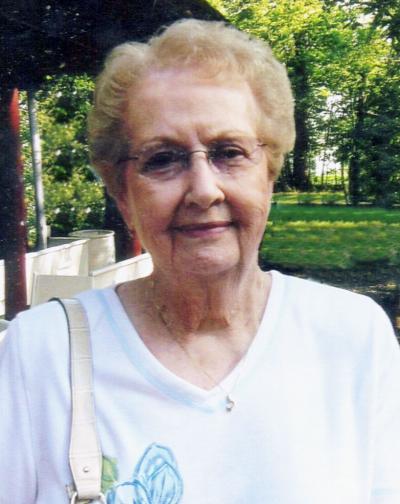 Marge worked from home as a beautician for many years, then later did office work for Diagraph at Herrin, IL.  Marge enjoyed spending time with family and friends, playing the organ, and her and her husband of 61 years enjoyed bowling on a league together and travel.

Survivors include a daughter Pamela (late Larry) Bailey of Evansville, IN; a son, Dennis (friend Mary) of Effingham; four grandchildren; five great-grandchildren and one great-great grandchild; and nieces and nephews.

She was preceded in death by her husband, parents, her two sisters and three brothers; a grandson; and several nieces and nephews.

A graveside ceremony will be held at 11 a.m. Monday, August 2, 2021, at Iola Cemetery.  Those wishing to attend are asked to arrive directly at the cemetery.  Arrangements are in the care of Frank & Bright Funeral Home in Flora.  Memorial donations are suggested to Louisville First Baptist Church and will be accepted through the funeral home.  To share a memory or condolence visit: www.frankandbright.com

With heartfelt sympathy. Thoughts and prayers are with family and friends.

We extend our deepest condolences to the family and friends.

Pam and Dennis- so sorry to see that your Mom has passed. I never normally say they are in a better place, but in her case, with all her siblings and your Dad gone, she is reunited for now! Pam, I’m sorry I didn’t know about Larry. We are in South Texas now.

We always enjoyed waiting on Mrs. Blair at Mike's Market in Louisville. She was the sweetest for sure... Sending prayers to a family & friends.

Pam/Darrin/Teresa, I'm so sorry to hear this. Keeping you in my thoughts and prayers during this difficult time. Love you! Renea

I know the name Marge Blair well. Her and Gerri Grogan were close at heart and enjoyed a wonderful friendship. Now they are both in heaven enjoying their friendship once again. Much laughter as always

We shall always remember Aunt Marge with great fondness and greatly regret that we had less and less contact with her over the years. I for one will always recall her lively spirit and energetic nature. Our sincerest condolences.