Memorials can be made to the Flora United Methodist Church, and will be accepted through the funeral home. 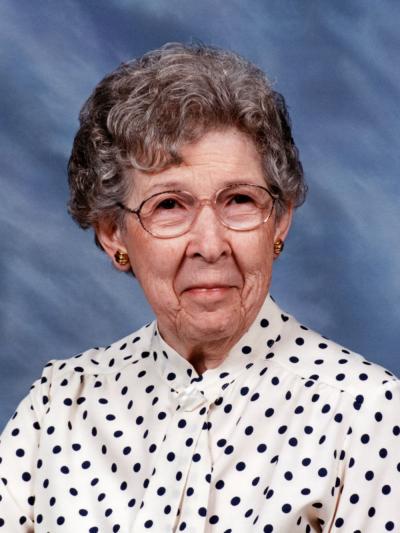 Visitation:  1 until 2 p.m. Sunday at the funeral home

Velma was born April 11, 1922, in Wayne County, near Rinard, to Verner and Maggie Weiler Bussey.  She attended a one-room school during her grade school years and graduated from Flora High School in 1939.

During World War II, Velma worked in the Midwestern Office Headquarters of the American Red Cross in St. Louis, Missouri.  She then moved to West Hollywood, working at a branch of the California Bank.  After the bank, she worked for the Southern Counties Natural Gas Company in Santa Monica and Venice, California, for 21 years.

While living in California, Velma was married to Joseph L. Davis.  They were married on August 12, 1950, in Las Vegas, Nevada.  Joseph passed away in 1974, two years after retiring from the United States Postal Service.

Preceding her in death were her parents; her husband; her nieces, Janet Harrell Rigg and Judy Harrell Winters; and special cousins, Helen Utterback Howell and Pearl Karr Durkee.

A funeral ceremony will begin at 2 p.m. Sunday, August 1, 2021, at Frank & Bright Funeral Home in Flora.  Burial will follow in Cisne Cemetery.  Visitation will be from 1 until 2 p.m. Sunday at the funeral home.  Memorials can be made to the Flora United Methodist Church, and will be accepted through the funeral home.

Thoughts and prayers to family.

MayvGod bless, comfort and give you and your family added strength at this time. Love ❤️ and prayers 🙏

So very sorry to hear of the passing of Mrs. Davis. She was such a sweet lady, and a wonderful neighbor to us when we lived on Birchwood. Our youngest son used to enjoy helping her with her gardening. She always had a smile!

I knew Velma and her sister, Fern Bussey when I lived in Johnsonville, IL as Wanda Lou DeSelms. My father, Lewis DeSelms owned a grocery store there. The girls probably knew my sisters. Geraldine (Gerry) and Darlene both who were older then me. My condolences to Velma's family.

Velma was such a sweet lady. She will be missed. Thoughts and prayers for the family.

Velma was quite the lady. We always enjoyed her in Unit 13cGarden Club, and always looked forward to her lessons and presentations . She was always very well prepared. My condolences to her sister, Fern. I know they were very close. May God keep you in his care.