Memorial donations are suggested to Clay County Ministerial Alliance Food Pantry or White Fields Worldwide Ministry and will be accepted through the funeral home. 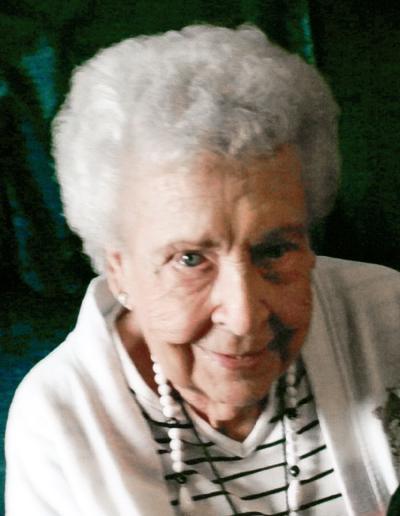 Those attending are asked to arrive directly at the cemetery.

Leona had worked at the International Shoe Company, Sparton Manufacturing, and Clay County Hospital, working in the kitchen.  Her dedication to faith was evident in her memberships at First Christian Church in Flora and Antioch Church in Olney.  She was a 50-year member and Past Noble Grand of the Rebekahs and sang with the Rebekah Quartet.  Leona enjoyed singing and playing the guitar.  She loved fishing, sewing, crafts, playing cards and dominoes, and always looked forward to attending the annual Hamilton Reunion at Charley Brown Park.  Leona also enjoyed time spent traveling and during a trip to Israel she and her husband Jim were rebaptized in the Jordan River.

A graveside ceremony will be held 11 a.m. Saturday, June 19, 2021, at Floral Garden of Memories Cemetery in Flora.  Those attending are asked to arrive directly at the cemetery.  Arrangements are in the care of Frank & Bright Funeral Home in Flora.  Memorial donations are suggested to Clay County Ministerial Alliance Food Pantry or White Fields Worldwide Ministry and will be accepted through the funeral home.  To share a memory or condolence visit: www.frankandbright.com

Jackie and family, My sincere sympathy to you and your family. Such a loyal friend to mom over the years and a classy lady. Always enjoyed our visits together. Prayers to you all.

I was so sad to hear this about Leona. She was a special lady. Eric always called her "Grandma Bologna", she always laughed. My thoughts and prayers go out to the Pemberton family. They always say, she's in a better place.. Her grand children will miss her.

so sorry for your loss, Leona was a thoughtful loving woman Who will be missed. Thoughts and prayers for the family.

You have won your crown of life. May God wrap His arms of love around you Dennis and Sue Hampsten

You have won the battle in christ. Love you. Elmo

So sorry to hear about Leona. She was a sweet lady and also one of my Rebekah sisters. Rest in Peace, my friend. You will not be forgotten.

I loved Aunt Leona so much. I have so many wonderful memories of our Pemberton family reunions and my time spent in the summertime with Uncle Vern, Aunt Leona and Vickie when they invited me to go with them on their vacations to "Dollyworld" and other vacation destinations. Vickie and I were so close and I would consider Uncle Vern and Aunt Leona as my "other" mom and dad. I will forever remember them...

Tom, Button and family: We are so sorry for the loss of your mother. Please know that you are in our thoughts and our prayers during this difficult time. May God bless you all all

Leona was a very good women and a great addition to our family when she married my cousin Jim. God Blessed those years!

My thoughts and prayers are with the family at this time. Leona was a very kind and special lady.