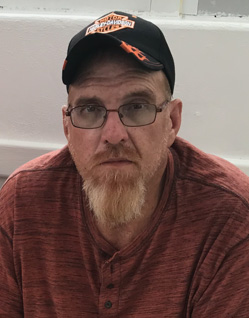 
A private family service will be held.

He was born December 27, 1970, in Fairfield, the son of Billy Joe and Janice Lee (Simpson) Doggett.  He was united in marriage to Yvonne Gail Smith on April 7, 1994, in Fairfield, and together they have shared 25 years of marriage.

Jerad was a 1989 graduate of Fairfield High School and went on to receive his associate degree in 1991 from Lincoln Trail College.  He was employed as a tool and die maker at Champion Labs for 28 years.  Jerad enjoyed riding his Harley, old trucks, tractors, and tools.  He had a very outgoing personality and had never met a stranger.  He cherished his time spent building and playing with his grandson Trentyn.  Jerad will be remembered as a loving husband, father, and grandfather.

He was preceded in death by his mother and stepfather: Janice and Carl Schroeder; maternal grandparents: Allen and Wilma Simpson; and an aunt and uncle: Allen and Rena Talbert.

A private family service will be held.  Frank & Bright Funeral Home in Flora assisted the family with arrangements.

My deepest condolences for all of you. Jared was a great guy who was taken too soon. Have a lot of great memories with him and Gail and the girls. I love you all.

My deepest condolences for all of you ,sorry for your loss Gail

Jerad was a lovely man and loved all his family so much, one of the sweetest men you could ever meet, even through all his health issues he would help out so many people . He will be greatly missed by us all. May he Rest In Peace. Praying for all those that he loved.

My deepest condolences Gail and family. He was such a sweet man. I missed not working with him so much.

I am so sorry for your loss. we always enjoyed time spent when he would come up to the motorcycle shop. Are prayers are with you all in this time of sorrow..

So sorry for your loss Gail, Jodie and family 😪 You are in my thoughts and prayers. Take comfort in knowing that he is no longer in any pain and you will see him again.

Gail you and the kids have been thru so much.Jarod has suffered so much. He is at peace now. you all have my condolencas.

The world has lost an amazing man.

Sorry to hear about Jerad's passing. He was a very nice man. Prayers for Gail, the girls and the rest of the family.

So sorry for your loss. hugs and prayers

So sorry for your loss. May God give you peace and comfort.

Love and prayers to all of you was a blessing to have known Such a wonderful man and be friends to him and his family. Hope you remember if I can help or any of the Griswold family can we will

I am so sorry to hear this, Jerad was a wonderful person. He will be greatly missed. We pray now that God just wrap his arms around the whole family and give you peace and comfort.

I have known Jerad since I was a child and always knew he had such a kind spirit. In recent years when I would have a chance to talk to him, he always talked about how much his family meant to him and how blessed he was! I am praying for peace & comfort for the family in the days, weeks, and years ahead. Cling to the wonderful memories.