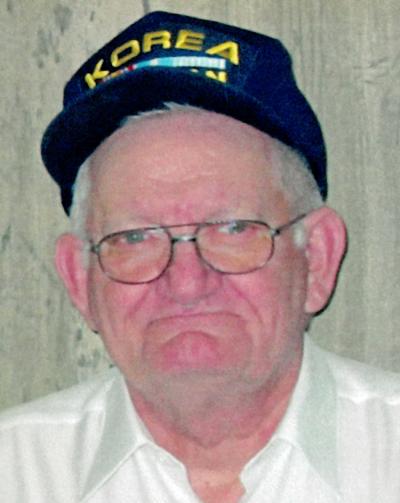 He was born April 5, 1931, in Clay County, the son of John Raymond and Cora Ednas (Anderson) Pickens.  He had been married to Barbara Stanley, and to this union 3 children were born.  He was later united in marriage to Shirley Cox and she preceded him in death.

James served in the Army during the Korean War in Battalion “A” 41st as a Forward Observer.  He was awarded several medals including the Purple Heart.  James was a union carpenter and had also worked in the oil field.  He had been a member of the Flora VFW 3999 and the Flora Eagles.  In the past he had enjoyed time spent hunting.

He was preceded in death by his parents; wife; a son: James R. “Randy” Pickens; a great-grandson: Berklee Pickens; a sister: Merle Foreman; 2 brothers: Eugene Pickens and Keith Pickens; and a stepson: Timothy Wright.

A graveside service will be 10 a.m. Saturday, October 5, 2019, at Dillman Cemetery, with the presentation of military funeral honors.  Those attending are asked to go directly to the cemetery.  Frank & Bright Funeral Home in Flora is in charge of arrangements.

We are so sorry for your loss. Sending our thoughts and prayers across the miles.

Pickens families: I'm sorry for both your losses in the month of September. Sincere condolences from afar.

We are so sorry to hear about Mr. Pickens!! He was our neighbor over on West 5th street in Flora, when we all lived there. My boys absolutely adored him!! My oldest son Brennon loved hearing his stories all about him being in the Army. Brennon would go over and just hang out with him. He loved to spoil my boys with cookies, and all that good sugary stuff. My lil guy Blaine, adored him, as well. He would say "I'm gonna go see Mr. Pickens" Sometimes I would say "now, you don't have to go bothering him all the time", as it seemed Blaine was over there every single day. I said something one day, and Mr. Pickens said, "Oh no, these boys never bother me, they can come over anytime they want. I enjoy their company." He was a character. He told me lots of stories, and told me all about his wife who passed, how she was a nurse, and such. The husband and I, along with others had to help him out quite a few times, in other situations, but we were always glad we was there to help. We always called him Mr. Pickens. Even after we moved, when he was still living there, when we did make it over that way, to see another neighbor, our boys would go over and see him a bit too. He would again give them goodies, and send some home with them. We hadn't seen him for a long time. The boys are gonna be so sad, when I tell them about his passing. Our deepest condolences to his entire family and friends!! May you fly high now Mr. Pickens.