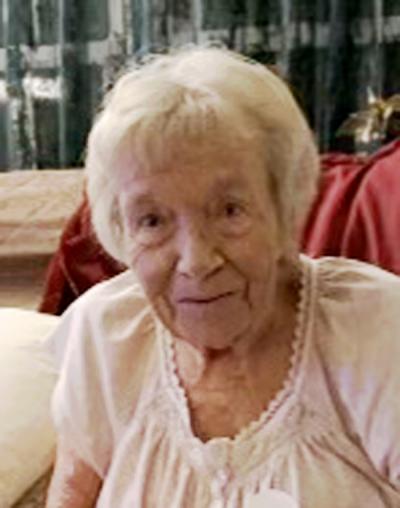 Visitation: 11 a.m. until time of service on Saturday at the funeral home

She was born March 4, 1943, in Commerce, Missouri, the daughter of Charles Lysander and Alberta Irene (Gross) Taylor.  She was united in marriage to William Edward Shroyer Sr. on December 8, 1961, and he preceded her in death in 1993.

Ruby worked at Head Start in Flora for 16 years.  She enjoyed flowers, hummingbirds, playing Bingo, and sitting on the front porch with her neighbors, children, and grandchildren.  In her younger years she enjoyed time spent at the cabin with her husband and kids.  Ruby will be remembered for her stubborn ways, and for being a loving mom and grandma.

A funeral ceremony will be held at 12 noon on Saturday, April 30, 2022, at Frank & Bright Funeral Home in Flora with Doyle Williams officiating.  Interment will follow in Dillman Cemetery, Sailor Springs.  Visitation will be 11 a.m. until time of service on Saturday at the funeral home.  To share a condolence or memory, visit: www.frankandbright.com

Sure miss all the fun we had at the river. Those were some good times. She was such a nice person. Just so sorry for loss. Teresa Saltsgaver Conrad

Scottt and Krystal We are So Sorry for your Loss.

U will be missed rest in peace from Thomas family

We had many great times at the Wabash River Camp with Bucky and Geraldine and fish frys . Will never forget and also the kids. Many Memories.

Condolences to the entire family. Geraldine will be missed.

I'm sorry for your loss may God ease your sorrows and pain in your time of need.

Scott and Krystal our sympathy and condolences during this time of loss.

So very sorry for your loss. Our hearts and Prayers are with you all !

So sorry for your loss!

Very sorry for your loss. My condolences

Sorry for your loss James,need anything holler

Spent a lot of time with Gereldine and Buck at the river. They were such good friends to my dad. She will surely be missed.

I worked with Geraldine for many years at Head Start. She was a Teacher's Aide. She helped me so much and was very good with the children. We enjoyed working together and I have many wonderful memories of those years. She was a good friend, and I will never forget her. I send my love and prayers to the family.

We will keep you in our thoughts and prayers.

So sorry for your loss. I pray God keep you close during this difficult time.

She was one of the nicest people you would ever meet,so sad.

Peggy I am so sorry to hear your Mom passed. May God be with you and bless you at this hard time.

I worked with Geraldine at Head Start years ago. She was a good friend, and a very nice person. So sorry for your loss !

So sorry for your loss your family will be in my thoughts and prayers.

I'm so sorry for your loss hugs and kisses

Our thoughts and prayers are with the family

You were a very remarkable lady.You had a witty sense of humor, a memory like no other, who loved her family thru the good & the the bad. Your strength, humbleness, and your "slight" stubbornness will be remembered by all. I'm thankful for knowing you. Our hearts are heavy. Our memories are priceless. You will forever hold a special place in the hearts of many, myself included. My sympathies go out to your family and friends. We all loved you very much!! We all will miss you even more! You will never be forgotten! Love, Beth, Eryn and Evan (We ❤ you All!) 💐🌹🌻🌷🌺💮🌾🪴🌼🌺🍀🙏❤

Peggy, I am so sorry to hear about the loss of your mom. Reading her obituary she was one blessed woman with family. May the good memories of her bring a smile to your face as you remember her. Praying for you at this time.

Mom you're so missed. I know you and Dad are together now and you are pain free. Our pain still hurts, we will heal and go on with life, but having no parents is rough. Praying you and dad continue to protect us, watch over us, and make sure we're all doing OK. ❤