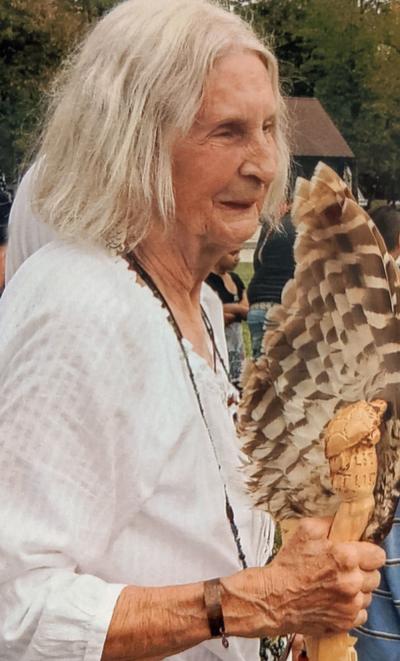 Sally Jo Stadge (Little Turtle Woman) of Olney, Illinois passed away peacefully on June 22, 2021 surrounded by her family.  She was the mother of seven children and a housewife for many years. After her children were grown, she held many jobs in the Olney area including working at Hallmark, the Country Club, Rural King, and The Garage Sale. She enjoyed visits from her children, grandchildren, and great grandchildren.

It was in her 50’s that she became interested in her Native American (Cherokee) heritage. Sally attended many Native American gatherings in Illinois, Indiana, Kentucky, and Ohio. She was also able to walk the Lakota path. She attended the Sundance ceremony at the Hoosier National Forest seven years in a row.

She is preceded in death by her parents Bernice (Hepsy) Warren and Walter (Funny) Warren; sister Dixie West; sons Guy, Todd, and infant Patrick Stadge; and daughter Carla Stadge.  Miss Kwadence E Kway walks with grandfather now. May her journey be peaceful and filled with the brightness she showed so many.   Aho Little Turtle Woman!

A celebration of life will be held at the lake house on July 18, 2021 from anytime between 10-2.  Arrangements are in the care of Frank & Bright Funeral Home in Flora.  To share a memory or condolence visit: www.frankandbright.com

Sally was an amazing woman. She made working at The Garage Sale so much fun! We shared many laughs and lots of love. Sally took me to my first Pow wow, I think it was when she got her name Little Turtle Woman. It was an awesome experience I will never forget. Little Turtle Woman made me a dream catcher that is now in my boys room. She is watching over and protecting them. I feel so blessed to have been a part of her journey. Much love to her family.

It is truly impossible to encapsulate here what 50 years of shared experiences with Sally and her family members mean to me. I count "Big Sal" / Little Turtle Woman as one of the most significant and compelling friends I ever had. No good-bye from me! I will see you down the path aways, my beloved friend! My condolences to all family and friends, for she cast quite a bright Light in this world!

Sympathy Kelly and family on your loss. My prayers are with you all!

Your family is in our thoughts and prayers for the loss of this sweet lady. We enjoyed reading about her life’s journey…I’m sure she was a wonderful storyteller! 🙏🏼

Sally was an amazing woman. I always admired her strength and courage. She was like family to me, as is the entire Stadge family. I spent so much time at their house, it was my second home. I love you, and the entire family. Rest In Peace Sally. You will be missed.

I met Sally when I taught her daughter, Carla, in my first class in Olney, IL. She welcomed me with open arms and open heart, as a part of her family. She adopted my husband Will and I as hunka children, and our children, Megan and Daniel as hunka grandkids. What a blessing to walk on this path with Sally...we are forever grateful for the beliefs she shared with us and welcomed us with guidance to see a more perfect world. Love always.

Mother will be missed by Sweetgraas and I. Her wisdom and unconditional love will be in our hearts forever. 💕

I spent so many weekends at Sally’s with her daughter Kelly. She was my best friend in grade school. I learned so much from their family. My memories are long. Fly high Sally. You were the best.

May she rest in peace and harmony.

I am proud to say I was one of her hunka children. What an honor. Sally was like a second mother to me and encouraged my quest for sobriety. Never critical, never unkind. The woman did not have an unkind bone in her body. She has flown away now. No more pain, no more worry. She will live forever in my heart and soul. Bye Mom.

Sally and Tracy are two of my favorite customers and also my dear friends. Sally will be missed. Fly free my friend.

Sally was always such a sweetheart to my family. She was a calming influence when things were rough around us. I can sense her peace now and I sure pray her family can sense it too . Love you, Sally ! The Jones family

Grandmother owl and I first met at my first Sundance. She camped next to our tent, and befriended us on my path to change my life in a good way. It was with an open heart, and an open mind, that she welcomed everyone in. Cuing me in with proper etiquette and attire. Holding my hand through some of my more tragic moments in life. I could call to her and she would be there for me. Our paths were meant to cross, and I will carry her on in my heart. My deepest sympathies for her family. I am here if you should need anything. Thank you for sharing her with the world.

Little Turtle Woman was a amazing lady always ready to help others in need , and very devoted to this spiritual way of life. Blessings on her spirit journey. Chief Steve McCullough. Salt Creek Sun Dance

I don't typically write on these message boards doing for my hunka sister Tracy Lee, met mom at my first sun dance my sis Chris brought me to and I had an instant deep connection to this incredible woman a paragraph cannot encapsulate such a person so won't even try, if are fortunate enough to have had her in your life you already know anyway...fly mom fly

Will and Vickie Devenport