In lieu of flowers, memorial donations are suggested to St. Stephen Catholic Church, St. Stephen Cemetery, or the Michael J. Fox Foundation and will be accepted through the funeral home. 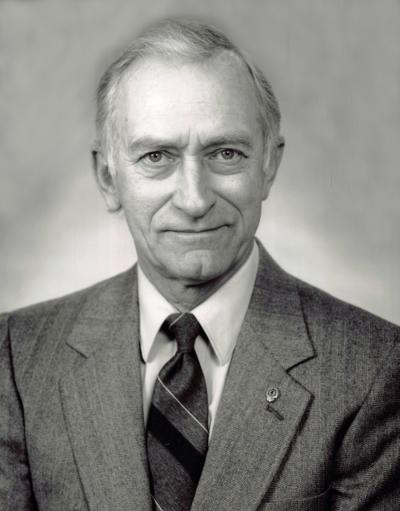 William, known as Bill to his family and friends, was born March 2, 1928, in Flora, Illinois, the son of William E. and Evelyn (Davis) Klein.  He was united in marriage to Emma Elizabeth Meglich on January 15, 1949, in Kirkwood, Missouri.

Bill was a local farmer all his life after service in the US Army Air Force near the end of World War II.  He was active in the Flora Community Consolidated School Board of Education for many years, finishing as President of the board.  Bill was a long-time member of the Illinois Farm Bureau including serving as Clay County President, Vice-President, and Director.  He was elected to the Illinois Agricultural Association (IAA) Board of Directors serving from 1993-1999.

Preceding him in death were his parents; 2 brothers and sisters-in-law: Donald and Marie Klein and Gerald and Pat Klein; 1 sister and brother-in-law: Evelyn and Kenneth Myers; and a granddaughter: Jessika Klein-Billingsley.

A graveside ceremony will be held 11 a.m. Tuesday, October 20, 2020, at St. Stephen Cemetery, with the presentation of military funeral honors.  Visitation will be 5-7 p.m. Monday evening, October 19, at Frank & Bright Funeral Home with a rosary ceremony to begin at 7 p.m.  In lieu of flowers, memorial donations are suggested to St. Stephen Catholic Church, St. Stephen Cemetery, or the Michael J. Fox Foundation and will be accepted through the funeral home.  To share a memory or condolence visit: www.frankandbright.com

I’m sorry to hear of Bills passing but we all know that he is in a better place. His service to the Flora School District will be remembered. During my year’s in the Flora School system I always appreciated his support

May William rest in peace in heaven... prayers for all his family for peace and comfort.

Bill and Debbie.. We are so sorry for your loss.

Our sincere sympathies to each family member in your loss. Mr. Klein was a good and respected man. You’re all in our thoughts and prayers.

We are sending the Klein family all of our love and prayers. Such a wonderful man, father, and grandfather. Papa Tractor, you will be deeply missed, but always remembered.

Bill and Debbie, I am so sorry for you family's loss. You are all in my prayers.

My sincerest condolences to all of you. I have such fond memories of times spent on the farm. It was always obvious that your dad loved his family and his life's work.

So very sorry for your loss. Prayers of comfort and strength during this difficult and sad time.

Sorrowful condolences to your family. Mr. Klein was an honorable man and a strong family man.

Our deepest sympathies to the entire Klein family. God bless you during this time of mourning.

My thoughts and prayers go out to the family of Bill’s.

We are very sorry for your loss!!! Bill was a great husband, father, and grandfather! We have many wonderful memories boating and visiting with your family!!! You all have our deepest sympathies and prayers!!!!🙏❤🙏

We are so sorry to hear of this. May you rest in peace.

My thoughts and prayers are with everyone. Poppy was a great man. 💕

I am so sorry to hear the news of Bill's passing. I enjoyed our time serving together on the Illinois Farm Bureau Board together and appreciate his service and leadership with the Clay County Farm Bureau. Blessings to your family during this difficult time.

Emma and family, I had the privilege of knowing Bill through our days in Illinois Farm Bureau. His steady manner and dedication were an asset to the organization and he represented his members very well. May you find solace in Christ as you share memories of a life well lived.

So sorry for your loss....Continued prayers for your entire family.

I'm so sorry to hear about the passing of Bill! He was a generous man & I enjoyed myself the few times I tagged along with Troy to go boating! He will be missed! Praying for your family. God bless!

So sorry to hear of your loss, Bill and family. Your Dad will be missed by all who knew him.

I met Bill when I was elected to the IL Farm Bureau board. He was chairman of the committee I was assigned. I always appreciated and was grateful for the way he treated me as a rookie. He could not have been more gracious. I'm sorry for your loss. He was a great colleague.