Memorial donations are suggested to Trinity United Methodist Church, Clay County Ministerial Alliance Food Pantry, or any charity of the donor’s choice and will be accepted through the funeral home. 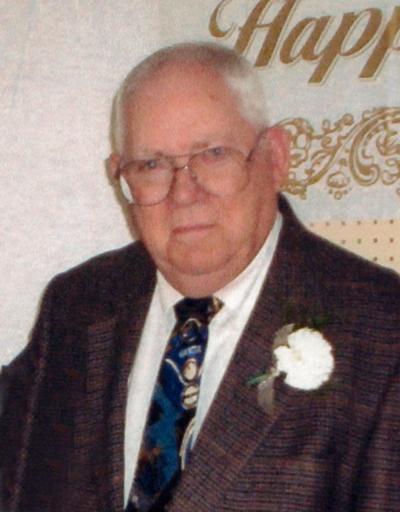 While attending his senior year of high school in 1944, Don was drafted into the U.S. Army (during World War II) and became part of the 232nd Field Artillery Battalion, 42nd Infantry (Rainbow) Division.  He was sent to the European Theater of Operations and his division moved through France and Germany, to the Austrian Rhineland.  He went on to a career with the Flora Post Office as a rural mail carrier.   He was a longtime and faithful member of Trinity United Methodist Church in Flora where he and Gerry had been a part of the Win-A-Couple Sunday School Class in the past.  Don was a member of Clay County Hospital Auxiliary, Flora American Legion Post #14, and Flora VFW Post #3999.  He was a past member of Rural Letter Carriers, Flora Airport Authority, a Trustee for Harter Township Cemeteries, and had also served as a member of Flora ESDA for 35 years.

He is survived by a son: Kevin L. Dickey of Olney; a nephew: Nyal (Vicki) Dickey of Flora; and a niece: Billie (Tim) Mojonnier of Flora.

He was preceded in death by his parents; wife: Geraldine Dickey; and a brother: Clifford N. Dickey.

A funeral service will be held 11 a.m. on Wednesday, January 22, 2020, at Frank & Bright Funeral Home in Flora.  Burial will follow in Floral Garden of Memories Cemetery with the presentation of military funeral honors.  Visitation will be 5-7 p.m. on Tuesday evening at the funeral home.  Memorial donations are suggested to Trinity United Methodist Church, Clay County Ministerial Alliance Food Pantry, or any charity of the donor’s choice and will be accepted through the funeral home.

I knew Don and Gerry all my life from the Trinity Church, The post office and many years at ESDA. Don was truly a great man and will be missed by many in this community.

We are so sorry to hear of your loss. If there is anything we can do please let us know. Praying that God will comfort you.

DONALD WILL BE MISSED BY MANY,WE LEARNED A LOT FROM HIM IN ESDA AND THING HAS CHANGED SO MUCH,OVER THE YEARS ,HE WAS A VERY ACTIVE MEMBER WHEN I JOINED 30YEARS AGO. REST IN PEACE DON AND JOIN YOUR LOVED ONE YOU MISS SO DEAR.

Sorry for your loss. Great gentleman.

I will him a lot because Don was great guy

To a great neighbors and good friend. He will be sadly missed.

Sorry for your loss, Kevin.