Memorial donations are suggested to St. Jude Children’s Research Hospital or Clay County Hospice and will be accepted through either funeral home. 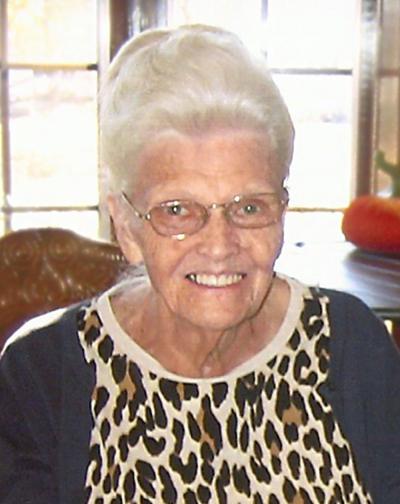 A funeral service will be held later this week in Henderson, Kentucky, followed by interment at Mt. Zion Cemetery in Reed, Kentucky.

She was born November 22, 1934, in Owensboro, Kentucky, the daughter of Sylvester and Luella (Spears) Whistle.  She was united in marriage to Norman A. Scott on September 24, 1949, and they shared 38 wedding anniversaries until his death May 26, 1988.  She later married Donald McGrew July 10, 1993, in Beals, Kentucky and they have shared 26 wedding anniversaries together.

Frances had worked for Saniclean and Zenith television factory in the past.  She worked in housekeeping and as a CNA for Red Banks Nursing Home in Kentucky and for several Flora nursing homes.  Frances was a current active member of Faith Holiness Church in Fairfield and had attended Beals Pentecostal Church in Kentucky in the past.  She enjoyed cooking, quilting, and working puzzles.

She was preceded in death by 2 sons: Marvin and Richard Scott; 1 brother: Billy Whistle; and 1 sister: Helen Dennison.

In Illinois, a visitation will be held 5-7 p.m. Tuesday evening, December 31, 2019, at Frank & Bright Funeral Home in Flora.  In Kentucky, relatives and friends are invited to Frances’ Life Celebration from 9:00 a.m. until the service time on Thursday, January 2, 2020, at Benton-Glunt Funeral Home.  The funeral service will be held at 11:00 a.m. on Thursday with Reverend Barry Skaggs officiating.  Burial will follow in Mt. Zion Cemetery, Reed, KY.  Memorial donations are suggested to St. Jude Children’s Research Hospital or Clay County Hospice and will be accepted through either funeral home.

Sympathies to your family for your loss.

She was loved by many because she was a wonderful person i had the pleasure of meeting her twice. You will be missed

Sis Frances was a sweet and special lady that loved her Lord and Savior. She will truly be missed. Our thoughts and prayers are with Bro. Donnie and their family. God Bless!

Sister Francis was a strong follower of Christ. She will be missed dearly, but we will meet again. Prayers go out to Don and the family.

My condolences to Donnie and his family