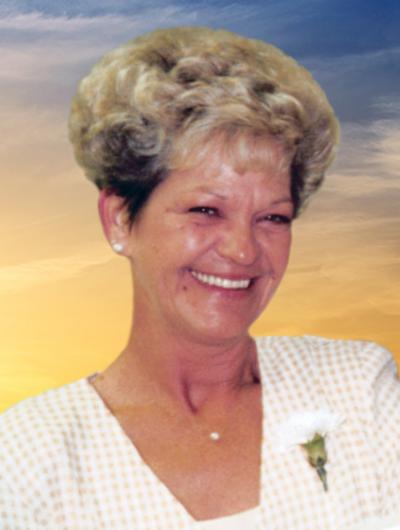 Ruthee was born September 16, 1941, in Golden Gate, Illinois, the daughter of John and Mildred (Gaddis) Bowman.  She married Richard Lewis Myers on February 9, 1960, at the Iuka Methodist Church.  Richard preceded her in death on October 22, 1995.

She grew up in Iuka, and following marriage she and Richard moved to Cowden where she cared for her home and family.  They later moved to Flora and Ruthee went to work for IGA, and later began a career at Flora Bank & Trust where she was promoted to head teller.  She enjoyed bowling with the bank team, took an interest in watching football, and was a member of Bethlehem Christian Church.  Ruthee loved spending time with her family and those she cared for.

A memorial ceremony will be held at 12:30 p.m. Monday, December 16, 2019, at Bethlehem Christian Church with Mark Luzadder officiating.  Burial at Elmwood Cemetery in Flora will follow the memorial ceremony.  A memorial visitation will be from 11:30 a.m. until 12:30 p.m. at the church on Monday.  Arrangements are in the care of Frank & Bright Funeral Home in Flora.  Memorial donations are suggested to the Bethlehem Christian Church Youth Fund.  To share a condolence or memory, visit: www.frankandbright.com

So sorry to hear of your Mom's passing. I always loved her laugh and that infectious smile. Prayers to your family .

RIP Ruthee. Grateful for our friendship.

Our thoughts and prayers are with you.

Lisa & Family So sorry to hear about your mom’s passing. Keeping you in my thoughts and prayers in the coming days.

So sorry for your loss Lisa.

So sorry for your loss Christy. Prayers for you & your family.

We knew Ruther for many years as our daughters were the same age as her daughters. Ruthee and I worked together at IGA for many years and she taught me how to knit one night at work when we had a slow night. Sorry for your loss prayers for all the family. Blessings.

Prayers being lifted for all of Ruthee's family.

So sorry to hear the passing of your Mother. Keeping everyone in our prayers.

Lisa and RANDY: we are sure leeping you in our prayers. DEB talked a lot about how dedicated you were at taking care of your Mom. May GOD bring HIS Hope, Joy, And Peace as you face the next few days and really the rest of your lives without her. GOD BLESS YOU Brad and Debbie

So sorry, Lisa, your Mother was such a sweet lady.

Sorry for your loss Lisa

So very sorry to read this. Ruthie was a nice lady and kept the bank going for many years. I hated to see her retire. She was the best.

Such a sweet and nice lady, she brightened up the world and will sure leave a big empty spot , will be missed by so many. s

Dear Lisa and family, I was so sorry to hear the news of your mom's passing. I was trying to think back of the many many years that I have known her and I can't think of one single time that I ever saw her without a smile. Such a pretty and sweet lady she was. I will keep you all in my thoughts and prayers.

Heaven has gained an angel...I sure will miss her smile...

Christy, So sorry to hear about your Mom. What a special lady! I have such fond memories of her while we were growing up. She was always so kind and always had a smile. Hugs to you, Lisa and your families. Love you!

My condolences to the family on their loss. It’s never easy to loose a loved one as we know.

Our deepest sympathy to all. Prayers for you during this difficult time.

So sorry for your loss Lisa and family. Our thoughts and prayers are with you during these troubled times.

Our thoughts and prayers are with you all. May you find peace and comfort in all the beautiful memories!

So sorry. She was a very classy woman.

So sorry for your loss Lisa. Your mom always had a smile and was a very kind and caring person.

So sorry for your loss, Love and Prayers for you and the family.

I'm so sorry to hear about Ruthie! Praying for you all!!

Our prayers are with you.

A friend. Ruthee was a fine, loyal and dedicated employee. Further, her heart was always giving to friends and especially to family. It is too soon. God bless and keep her.

Sorry for your loss. Praying for comfort for you at this difficult time!

Always enjoyed working with Ruthie at the IGA,very nice lady!

Donna, We were so sorry to hear of your sister's passing. Please know you and your family are in our prayers.

So sorry for your loss. I worked with Ruthie many years ago at IGA. She was a treasure.

Yancey and Lori Glassford and Family