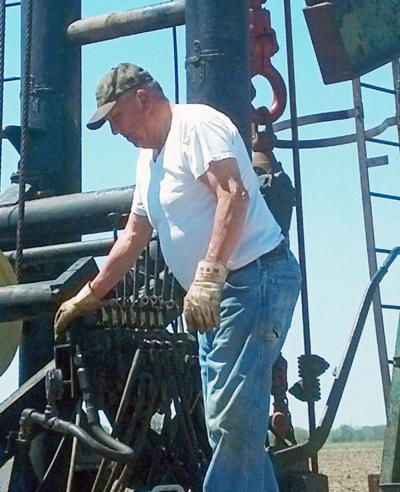 Visitation: 1 p.m. until time of service on Saturday at the church

He was born July 14, 1939, in Hoosier Township, the son of Allen Guy and Wanda G. (Rinehart) Britton.  He married Alice Jane Reuter on January 18, 1958, in the parsonage of the Louisville United Methodist Church, and they have shared 61 years of marriage together.

Bill was a lifetime oilfield man, running rigs and operating CAT heavy equipment for several oil producers including Reid, Strickland, and Shelby Britton. He had also been part owner of Dependable Well Service of Fairfield and part owner of B B & W Inc., an oilfield service in Farina with his grandson, Jeremy, and son-in-law, Rick.  He also did some farming.  He loved hunting and net fishing, and was an avid St. Louis Cardinals fan.  He especially enjoyed trips along country roads, and having his loyal dog companion, Sparky, by his side.  Bill was a member of Red Brush Christian Church since 2003, and in November 2018 he took part in a re-baptism ceremony in affirmation of his faith in Christ.  He will affectionately be remembered for the love he shared with his family, and the cherished time he spent with them.

He was preceded in death by his parents; a brother: Francis Wayne Britton, and an infant brother: Donald Eugene Britton; and 3 nieces and a nephew: Barb, Janet, Carol Jo, and Roger.

A funeral ceremony will begin at 3 p.m. Saturday, October 19, 2019, at Red Brush Christian Church in Louisville.  Interment will follow in Iola Cemetery.  Visitation will begin at the church at 1 p.m. and continue until the time of service.  Memorial donations are suggested to the Red Brush Christian Church Expansion.  Arrangements are in the care of Frank & Bright Funeral Home in Flora.  To share a memory or condolence, visit: www.frankandbright.com

We are thinking of all of you and are so sorry for your loss. We will be praying for God's comfort in the days ahead.

I am so very sorry for your loss. Bill was such a kind and wonderful man and he will be missed deeply by so many. You all are in my thoughts and prayers prayers.

Wishing you the strength and love from God at your time of loss. Bill was a hard working man with a wonderful family.

Dear BRITTON Family: Your family is in our thoughts and prayers. May God comfort you during this time of sorrow and sadness. Brad and Debbie

To all the Britton family, we express our heartfelt sorrow and sadness during this difficult time. He is in Gods kingdom now and may God bring His comfort to each of you.

Prayers for all the family

Sending prayers for the family

My thoughts and prayers for the family.

So terribly sorry to hear of Bill's passing. Sending prayers to the family & especially to Alice! Love to you all!

So sorry for your loss. You and the family are in my thoughts and prayers.

Dear Alice and family.....You are all in my prayers. May God bring you all peace and comfort, Amen.

Sorry for your loss. Prayers for all.

So saddened to hear of Bill's passing. He was a good man. Prayers for comfort and peace for Alice and all his family.

So sorry for your loss. Thoughts & prayers for the family during this sad time.

Billie and Bud, he was a HAND! I know you'll all miss him

Sorry for your loss prayers for the family. You might not remember me by this name but I was the other Mona from Kerns.

Prayers of comfort and peace to the family...

I am so sorry for your loss. Prayers for comfort for all of your family during this difficult time.

Our loss is Bill"s right to go to heaven. Very saddened by the loss of a good man.Will miss seeing Bill sitting on the end of the pew behind Don and I.Will always remember his early morning trips to the kitchen for his coffee and Alice"s treat before passing out pamphlets or opening the door"s for people to enter the church for first service.

We are so sorry for your loss. Our heart felt thoughts and prayers are with you during this sad time. May you find peace and comfort in the days ahead.

Alice Bill Bud Mona Kathy in laws and most but not least those grandkids. My heart hurts for each and everyone of you. Great man he was.May you find peace and comfort in the days and years ahead.God Bless you all.

So sorry for your loss! May our Savior be with each of you at this time of sorrow! My prayers are for your peace! 🙏🏻🙏🏻🙏🏻🙏🏻

You are all in our prayers May God’s peace be with you all during the days ahead.

A life well lived.... A family well loved and raised... Quite a legacy with prayers and comfort for the family A loss that we hope is comforted by so many memories....

So sorry for your loss, we are thinking of you family at this time , prayers for you all.

Our thoughts & prayers are with the family. God be with you at you time of loss.

We are so sorry for your loss. You are in our thoughts and prayers. MAY God be with you all

To the family of Bill Britton, we extend our sympathy for your loss.