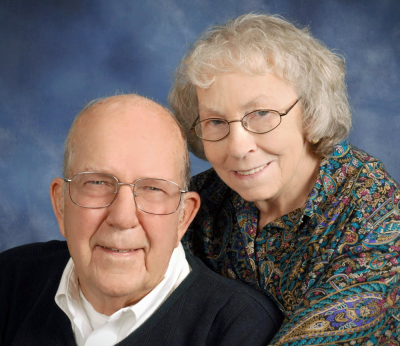 Jim and Doris were united in marriage on December 25, 1953, and to this union 4 children were born.  Jim graduated from Flora High School and later joined the Army where he was stationed in White Sands, New Mexico.  He worked in the oil field and for Retail Credit Company which later became Equifax until his retirement.  After retirement, Jim worked for Star Lumber Co. in Wichita for many years.  Jim loved his hobbies which included woodworking, fishing, gardening, cooking, and people watching.  Doris also graduated from Flora High School and later worked for Bell/AT&T until her retirement.  Doris was always active in the church where she enjoyed singing in the choir and helping with church activities.  Doris also spent a lot of time trying to “keep Jim in line” since he was quite a joker.  Jim and Doris loved to spend time with family and despite their busy schedules they always made time for their children and grandchildren and cherished every moment spent with them.

Jimmy is survived by a sister: Billie Jean Roff and a brother: Richard (Glenda) Sperry.

Doris is survived by her brother: Dwight (Jane) Dulaney; and a sister-in-law: Margaret “Honey” Dulaney.

A graveside memorial service will be held at 2 p.m. Saturday, October 19, 2019, at Elmwood Cemetery in Flora.  Those attending are asked to go directly to the cemetery.

So sorry to hear of Jim and Doris passing. Doris and I were good friends. Jim was such a nice guy. They made a perfect pair. Velma Price

I'm sorry for your loss! My prayers to the family. Doris & I are first cousins. Our fathers were brothers & it was very hard to tell them from each other. God bless U all!

So sorry for your loss !

I SPENT MANY HOURS PLAYING WITH JIMMY'S TRAINS DOWN ON AUSTIN AVE. HE WAS A FUN KID!

It is so hard to lose a loved one. Dude, having lost 4 brothers, I know how hard it is to lose a sibling. My prayers are with you.

My condolences to all the family. Jim and Doris are great people and will be missed. I truly enjoyed the time I had with them. Thoughts and prayers for you all 🙏🏻💖