Memorial donations are suggested to Clay County Hospice and will be accepted through the funeral home. 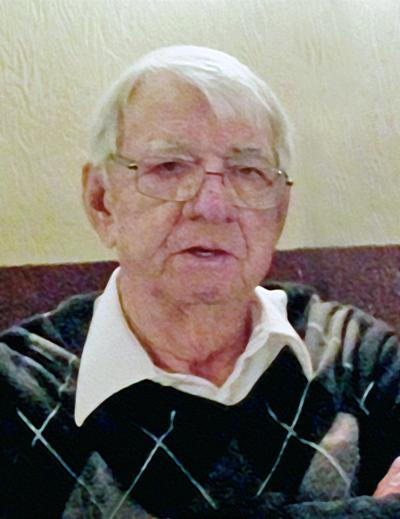 Visitation: 5 until 7 p.m. Monday evening at Frank & Bright Funeral Home, with a Rosary Service at 7 p.m.

Bernard served in the US Army stationed in Germany.  He worked as an electrician and in heating and cooling, in previous years working at Etchison Appliance in Flora.  He was a member of the Elks, American Legion, VFW, and St. Stephen Catholic Church in Flora and was an avid St. Louis Cardinals fan.

He was preceded in death by his parents; both wives; and 4 brothers: Leo, Charles, Richard, and John Dunnigan.

A funeral mass will be celebrated at 10 a.m. Tuesday, July 2, 2019, at St. Stephen Catholic Church in Flora.  Interment will follow in St. Stephen Cemetery with the presentation of military funeral honors.  Visitation will be 5 until 7 p.m. Monday evening at Frank & Bright Funeral Home, with a Rosary recital at 7 p.m.  Memorial donations are suggested to Clay County Hospice and will be accepted through the funeral home.

Fly high, Uncle Benny. Thank you for everything.

So sorry for your loss He was a nice guy.

Benny was such an original person. Rick has lots of great memories of him. He also stood up with Shirley and Neil Eaton when they were married . I remember him as a kid as the Kool - Aid Kool man. Him and Neil would do the Kool - Aid Kool dance years ago after having a cold beverage or two. This community will miss you so much Benny!!! I know if I were telling you this right now you would say .... Oh shut up you Fool... I will miss that sense of humor and so much more. R.I.P. Mr. Benny. We love you ❤

Sorry for your loss, Dunnigan family. Benny had a good, long life, and was a blessing to us.

Adios, Amigo. If you ever needed help, Ben was the first one to arrive. He was truly 'The Right Stuff.' Ben was a real friend to all of the Etchison family.

Bernard was a great friend to all of us Whelans. His folks and our folks played cards at least 1 - 2 times a week. Also, we all went to St. Stephens. Rest in peace Bernard.

Benny was one of a kind and always nice to me. Won't ever forget one particular statement he made to me that that opened my eyes...smart man who paid attention to lots of things..rest easy Benny and peace to the family.

RIP Little Bernard! Our parents played cards all the time together. We had a lot of good times! Will miss you and kitty at the Elks club!

Sorry to hear of Benny's passing. When my family would come to Flora to visit relatives we became friends with Benny. He came to see us in Iowa 25 or 30 years ago and bought an old windmill we had, disassemble it, loaded it up and hauled it back to Flora with the intention of reassembling it and putting it on his property.

Our family’s lives have been forever altered with the loss of you & grandma. 💔 Thanks for the memories and give grandma big hugs for me! Rest In Peace Bernard!

Dina May and Darrell Cartright

Benny Rest In Peace Prayers to the Dunnigan Family

I always enjoyed chatting with Benny. He had a sense of humor like no other. May he now rest in peace and enjoy eternal life with Kitty.

So sorry for your loss! I remember meeting him at the American Legion,he wasvery nice to me. His Father was my Uncle Bernard and his mother Mary would come over to our house and help hang wallpaper.

Bernard: From the land owners at the Lake. Our favorite "go to guy" has passed. Your insight and mechanical skills resolving so many problems here in the wilderness of Clay County,...'will never be forgotten!'

Great guy, will sadly miss his daily visits to our auto body shop, always made me laugh about life in general

Sure going to miss you Bennie. Going to miss one of the stop overs and the good times we spent at the East End Cafe and the West Y.......not to mention Olney Lake.

Sorry for your loss. Bernie was a very nice man, prayers for all the family.