Memorial donations are suggested to Clay County Cancer Crusaders or Clay County Hospice, and these will be accepted through the funeral home. 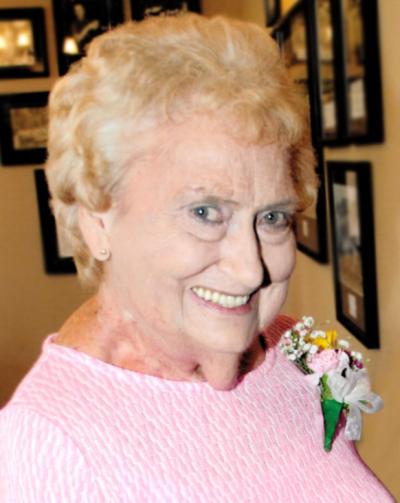 Bernadine Boyer, age 82, of Flora, Illinois, passed away Wednesday morning, June 26, 2019, at her home, in the loving care of her family.

Bernadine, “Mom” or “Grandma B” was devoted to sharing her time and love with her family during frequent visits, daily phone calls, iCloud, and participation in activities that she attended over the years. She will be remembered for keeping careful track of birthdays, anniversaries, and other important dates.  Her longstanding interest in genealogy inspired her to research and document an extensive family lineage that has emphasized the importance of family in her life.  Bernadine loved cats, and shared her home to several over the years, including her current housemate, “Kitty Vi.”  During her working years, Bernadine was employed in the office at Anaconda, at both Flora nursing homes, and served several roles at Minwax including secretary to the plant manager prior to her retirement.

A funeral ceremony for Bernadine Boyer will be held 10 a.m. Saturday, June 29, 2019, at Frank & Bright Funeral Home.  Interment will follow at Hillcrest Cemetery in Centralia.  Visitation will be from 6 until 8 p.m. Friday at the funeral home.  Memorial donations are suggested to Clay County Cancer Crusaders or Clay County Hospice, and these will be accepted through the funeral home.  To share a condolence or memory, visit: www.frankandbright.com

So sorry for your loss. We will miss her. She was a beautiful person and we thought the world of her. She was always smiling, no matter what was going on. She was a blessing and a joy to be around. Praying for the family, that you always find comfort in your wonderful memories .

My deepest condolences. Sending up prayers for your family.

Donna, you & your family are in my prayers. I know it's tough losing your Mom, no matter what age they are. Asking God to give you the peace that passes all understanding.

So very sorry for your loss. My thoughts and prayers go out to the Family.

Bernadine was a kind and caring person. I will miss her and consider it a blessing to have the honor of calling her friend. My prayers and condolences to her family.

I’m so sorry to hear about the loss of your mother. You are all in our thoughts & prayers. Your mother was a sweet & wonderful lady.

So very sorry for your loss. Bernadine was a blessing to me and I will cherish her memory always. She was such a caring and kind lady. I count it a privilege she considered me as part of her family. Will miss her, rest in peace my friend,Cheri

Our condolences on the passing of Bernadine. It was an honor to have known such a wonderful lady! May God embrace you in comfort during this difficult time!

I'm sorry for your loss. Another one of our old neighbors has gone to a new home. My thoughts are with you.

Words cannot express the sorrow we feel! Our deepest condolences.

So Sorry for Your Loss.❤️

My heart is aching on the passing of Aunt Bernie. I am so grateful Josey and I made it down and had a wonderful visit a few years back. Rest well.

Condolences to the family left behind. Special thoughts and prayers for Rhonda Keck in the days that follow. May she find comfort in knowing that friends will keep her close in their thoughts.

Sorry for your loss. Berdine was a wonderful person, I have know her for years and waited on her when I worked zt IGA. Prayers for the family.

From the Jenkins family near Chattanooga, we pray for comfort and peace for the family during this time of loss. Our thoughts and prayers are with you!

Bernadine was a beautiful person. I will always remember her smile and caring nature.

Sorry for your loss, prayers for all.

I am so sorry for your loss. She was a great woman and mother.

David and Sharon, please accept our deepest condolences and we pray that God please be with beloved Bernadine and with you and yours.

Please know that our thoughts are with you at this time. It is wonderful to see that she has had such an extensive, caring family that supported and loved her

Thinking of you and hoping for comfort for you and your family during this really difficult time. Love ya Rhonda.