Memorial donations are suggested to Zif Baptist Church or the Clay City Fire Department and will be accepted through the funeral home. 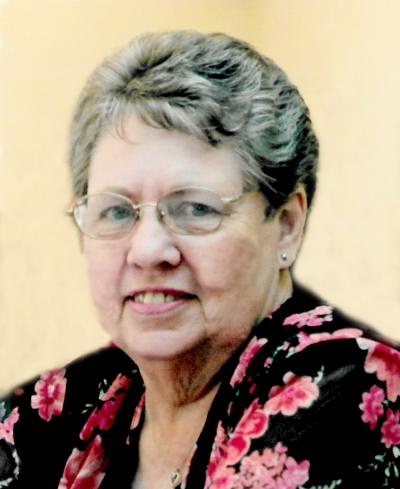 Visitation: 10 a.m. until time of service at the funeral home

She was born November 6, 1936, in Bridgeport, the daughter of William Elmer and Beulah Ellen (Keneipp) Hall.  She was united in marriage to Kenneth Harold Hostettler on June 1, 1954, at the United Methodist Church in Clay City and together they have shared 64 years of marriage.

Evelyn embraced her family and grandchildren with a lifetime of love and care, and they brought her countless smiles and much happiness.  She enjoyed planting and tending to her flowers and abundant vegetable garden, and she was often taking time to make progress on her crocheting, quilting, and sewing projects.  She also welcomed the opportunity for a fishing outing or camping trip.  Evelyn retired after over 50 years of service to The Clay City Banking Company as a bookkeeper and in other roles.  She and Kenneth became members of Zif Baptist Church where she worked with the Missionary Group in the past, and they were formerly part of Hoosier Prairie Baptist Church.  She assisted with the bookkeeping and activities of the Clay City Fire Department and volunteered her time to help many others throughout the years.

She was preceded in death by her parents; a son: Kenneth Wayne Hostettler; a grandson: Steven Hostettler; a great-grandson: Kamden Blanchard; a brother: Phillip “Fish” Hall; and a sister-in-law: Mary Ruth Hall.

A funeral service will be held 1 p.m. Thursday, May 23, 2019, at Frank & Bright Funeral Home in Flora with Kelly Carruthers officiating.  Interment will follow in Clay City Cemetery.  Visitation will be 10 a.m. until 1 p.m. on Thursday at the funeral home.  Memorial donations are suggested to Zif Baptist Church or the Clay City Fire Department and will be accepted through the funeral home.

Remembering your family in prayer.

so sorry for your loss prayers for all of the family

We are so very sorry for your loss. Our condolences go out to the family.

Our love and prayers go out to you, Kenny and all of the family and especially to our neighbor Ali. Evelyn was a wonder lady and worker in her church. May God Bless You and Hold You Close Brad and Debbie Harris

May our Father God wrap His loving arms around you and bring you comfort & may you also find peace as heaven gains another saint.

So very sorry for your loss. My thoughts and prayers are with all of you.

So sorry for your loss. She was a sweet lady. Will be missed by many people.

So sorry to hear Gwen. Hugs my friend.

Kenny and family , we are so sorry to hear of Evelyn’s passing. May God comfort you all at this time. Remembering you in prayer.

I’m so sorry to hear about Evelyn’s passing. She was a kind and pleasant person to be around. I shall keep you all in my prayers as you go through this time of grief and pray for God's grace to cover you. Your cousin, Linda

Thoughts and prayers to you all. Praying God gives you strength and comfort in the many days ahead. Hugs to all

So sorry for your loss. Prayers for the whole family. Hopefully the tears you have now will turn to smiles at the memories she left you.

To the Family of Kenny and Evelyn , Our sincere condolences, what an awesome lady, her family has done so much for Clay City, I enjoyed playing ball with Tony , and working the oilfields. May God comfort you all in these days to come.

To the Family of Evelyn Hostetler. We have a prior commitment, so will not be able the be at the funeral home. We want to extend the condolences to the Family and wish you all the comfort possible, with the loss of Evelyn. We keep you in our thoughts and prayers.

So sorry for your family's loss, prayers to you all..

I am so sorry for loss.I will keep you all in my thoughts and prayers.

I mourn the loss of my cousin, but I rejoice that she is in heaven with others that have gone before.

So sorry for your loss. Praying that you find comfort and peace at this difficult time.

Sorry for your loss. God bless your family.

Kenny and family so sorry to here of your loss. Clay City has also lost a great lady. You are in our payers.

Are thoughts and prayers are with you.

Prayers, love and hugs to the family. Evelyn was a very special lady to a lot of people. She will always be remembered.

Keeping you all in my thoughts and prayers.💗

So sorry for your loss. Our thoughts and prayers for the family.

My thoughts and prayers are with you and your family

Kim and Tim..I'm so sorry for the loss of your mom. Prayers for comfort for you and your family at this most difficult time.

Sending prayers for comfort and streangth!

Jacob and Angelina Hemrich and family