Memorial donations are suggested to Flora American Legion, St. Jude Children’s Research Hospital, or to any charity of the donor’s choice and will be accepted through the funeral home. 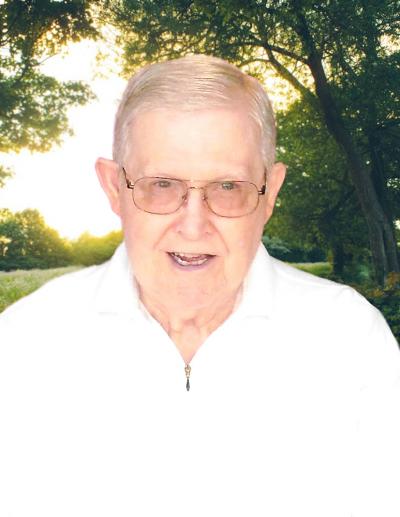 Visitation: 10 a.m. until time of service Friday at the funeral home

Wayne served in a medical unit with the US Army during World War II and was among the first to land during the D-Day invasion of Okinawa.  He later served in Korea.  Wayne was a past longtime member of Flora First Christian Church where he served as an elder and taught Sunday School, and he recently requested to renew his baptism at Red Brush Christian Church of Louisville.  He was also a member of Flora American Legion Post #14.  Wayne’s career was spent in the oil business, from the early days of working in the fields after returning from his Army service, and later going to work for Pure Oil Company.  He later owned and operated his own business, R & W Oil Company.  After selling the company and retiring, he and Louise had an opportunity to travel and see the country.

A funeral service will be held 11 a.m. Friday, May 3, 2019, at Frank & Bright Funeral Home in Flora.  Interment will follow in Elmwood Cemetery, Flora.  Visitation will be 10 a.m. until time of service Friday at the funeral home.  Memorial donations are suggested to Flora American Legion, St. Jude Children’s Research Hospital, or to any charity of the donor’s choice and will be accepted through the funeral home.

Cheri, Linda Roger.... I loved your Dad very much. I was at your house all the time and he always treated me as if I belonged there. There is a song that will forever remind me of your Dad... Cheri you know how excited he was when he got home on a Friday after work and he had a 45 record in his hand ... come in here you girls you have to hear this song.... it is the funniest song I have ever heard..... it was.... Dead Skunk In The Middle Of The Road. It was a funny song.... but the best part was to see your how your Dad wanted to share his joy over something with us too. It is tough when both parents are gone from this earth but they are always in our hearts and we are left with so many good memories. Love you all, Trudy

We are sorry for your loss . Prayers for your family

So sorry for your loss, he was a great man. Prayers for you all. Love Alan, Maureen Tolliver

We are so sorry for your loss. Please know that y’all are in our thoughts and prayers during this difficult time and in the days ahead. May God bless you with strength and comfort. RIP Mr. Murphy❣️

Ruthie and I cannot attend the services as we have to be at the Marion VA to help as volunteers at the Vietnam Wall. We enjoyed visiting with Wayne many times at Heritage Woods and the Rehab Center. Our deepest condolences are extended to the family.

What an honor it was to serve Wayne at Heritage Woods. He will be missed.

So sorry to hear of his passing Wayne was a super nice guy.

Your Dad was such a delight to see and talk with at Heritage Woods . He was always a Sweetheart and always had something good to say and the sweetest smile . Your parents were both amazing . I know that Courtney always loved going to their house with a Jenny . Thoughts and Prayers for All ......

Sorry for your loss!

Cheri, only met your dad a couple of times but Jenny talked so much about him, the happy times and family love. Prayers for you all!

Wayne was such a great guy! You all have our prayers and sympathies at this hard time in your lives.

So sorry for your loss...praying for your family.

So very sorry for your loss. May the Lord guide and comfort you at this time.

To Wayne Murphy’s Family, We are so sorry for your loss. Prayers for the family. 🙏🙏. Jerry and Carolyn Bible

We are so very sorry for your loss. We know he will be sorely missed. We are keeping your family in our prayers.

So sorry to hear of Wayne’s passing but I know there is joy in heaven where he has joined his Lord Jesus Christ as well as his loved ones. He was such a fixture around the First Christian Church during my childhood and as an adult. I miss his smile and always an interest in what was going on in your life and the church.

Sorry for your loss. Prayers for you and your family.

Our thoughts and prayers are with your family at this difficult time. May God give you comfort in all the wonderful memories of your father & your family. 💕

We are so sorry about your dad

Wayne was such a sweet, kind and funny man. I really enjoyed visiting with him during his time at Heritage Woods. I am so sorry for your loss.

Our condolences to the family. We lived across the street on East 4th for many years and remember you all as very nice neighbors.

So sorry for the loss of your dad. May God give you great comfort in this difficult time.

The suffering is over, but it is still so hard to let go of our Dad. Our sympathy is with you in your loss.