Memorial donations are suggested to The Pulmonary Fibrosis Foundation and will be accepted through the funeral home. 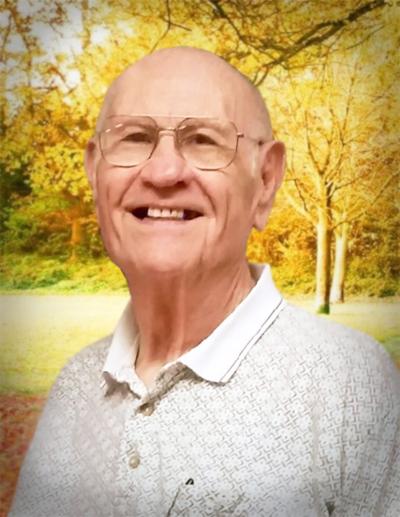 Interment:  Elmwood Cemetery with the presentation of Military Funeral Honors

He was born July 30, 1930, in Clare, IL, the son of Edward and Eleanor (Shott) Clarner.  He was raised in Sycamore, IL, and graduated from Sycamore High School in 1949.  Kenneth married Norma J. (Mathey) Clarner on April 6, 1956, in Sycamore.  Ken loved spending time with his family and friends playing cards, Pinochle being his favorite.  In their younger years, he and Norma would spend their time square dancing and traveling the globe.  A few of Ken’s favorite locations they visited include London, England, China, The Holy Land, and many others in the Eastern States and Europe.  Ken and Norma loved going on bus trips across North America visiting places they hadn’t yet seen, traveling to Branson, MO to watch live shows, and Evansville, IN visiting the boat.  Ken and Norma would also enjoy their daily trips to McDonald’s visiting with their many friends.  Kenneth lived his life to the fullest, embracing every day as a new one, enjoying every step, cherishing every breath, and loving every moment that God granted him.

Kenneth was enlisted in the Army during the Korean War and stationed in Germany for 3 years.  Kenneth is a lifetime member of the VFW #5768 of Sycamore, the American Legion #14 of Flora, and the Moose Lodge in Flora.  He is also a member of the First United Methodist Church in Flora.  Ken attended Barber College and barbered from 1954 until 2016.  In 1970, the family moved to Flora where they purchased the Starr Hotel and operated it until 1983 where he barbered in the lobby.  Kenneth received the Special Recognition Award from the Flora Chamber of Commerce in 2015 in appreciation of his 45 years of business in Flora.  He also worked for the B&O and CSX Railroad for 17 years.

Preceding Ken in death were his parents, 4 sisters, and 1 brother.

Family, friends, and others whose lives were touched by Ken are invited to the Frank & Bright Funeral Home, 500 North Main Street, Flora, IL 62839, to reminisce, grieve, and support each other.  Visitation will be held on Saturday evening, March 23, 2019, from 4 until 8 p.m. Additional visitation hours will be Sunday, March 24, 2019, from ­­­­­12 noon until 2 p.m. with a memorial service following at 2 p.m.  Interment will follow in Flora in Elmwood Cemetery with the presentation of Military Funeral Honors.  Memorial donations are suggested to The Pulmonary Fibrosis Foundation and will be accepted through the funeral home.  To share a memory or condolence visit www.frankandbright.com.

So sorry for your loss. Prayers for your peace. God bless.

Ken has been a light of love for his God, his family and his friends. He will be greatly missed.

Prayers are sent to the family during this difficult time. Ken will be missed by many. Thinking back I like to know the number of times that he gave both my sons haircuts throughout the years. That number would be up there. The tiny barber shop was always packed. I always enjoyed listening to him talk about his travels while we waited. He was always good at his job and his daughter now gives both of my sons their haircuts. May you find peace in knowing that he is now home with GOD and is now pain free. Job well done our good and faithful servant of GOD. Prayers sent for comfort to all of Ken's wonderful family. May you always cherish the wonderful memories of Ken.

We are so so sorry for your loss. He was a very special man and asset to our community for many years and it is so great that Nan, his daughter, became a barber like her Dad. She does and will continue the awesome Barber Shop.

Norma and family I am so sorry for your loss he was a wonderful person. I pray God will wrap you all in his arms and be with you at this terrible time. Bless you all.

We came from Sycamore,Il. Soon met Ken ,That was 51 years ago.They were also from there...and were married the day before us,were at the hospital at the same time having babies..cut all the hair...Played golf with Norma..So many precious memories..God be with you.

So very sorry Jodi and Brian. He was a great kind hearted man. Wishing you the best. And family.

Rich, your classmates from near and far send their condolences at the passing of your Dad. Our thoughts and prayers are with you.

Sorry for your loss. Ken was a wonderful person and will be greatly missed. Prayers for all the family.

So sorry for your loss. My thoughts and payers go out to the Family.

So sorry for your loss. We will be thinking of your family in the days ahead.

Enjoyed many an afternoon setting in the barber chair, talking about our grand children. My condolences to the family, GOD BLESS!

Jodi & family,so sorry for your loss. Our thoughts & prayers are with you. Your dad always had a smile & a kind word. Cherish your memories!

Ken & Norma were our neighbors for over 20 years. They're wonderful people. I pray Norma & the family will take comfort in their faith, knowing Ken is now with God & that they feel God's arms around them giving comfort, strength, & peace.

Thoughts and prayers for family, friends, and acquaintances.

My sincere condolences to the family. He was a fine person.

I’m very sorry for your family’s loss, my sympathy and prayers are with you at this difficult time.

So sorry for your loss, Ken was a great man, and will be missed by all that knew him. Thoughts and prayers for the family.

We are so saddened by the loss of our dear friend. We will miss him, but know, he is in a much better place with his God, whom he worshiped and adored. Ken was such a blessing, and a guiding light for us all. Thoughts and prayers for his wonderful, loving family at this difficult time. ((HUGS))

We are praying for you all during this most difficult time of grief and loss. We pray that God will lift you up and give you strength, endurance and comfort. Many blessings to you all.

May you Rest In Peace Great Uncle Kenny.

I am so very sorry to hear of Ken's passing.May God bless and comfort all of the family and loved ones

Ron and Deedee Clarner and family.. so sorry to hear about your father-in-law Deedee !! Sorry abiut your Dad Ron!!God grant him eternal Peace!!love u all !! From all of us in Plano ,Texas

lois and Carl workman and family

sorry for your loss ,Our deepest Sympathy to the whole family

My thoughts and prayers for all the family. So sorry for your loss.

We are so sorry for your loss! What a great man & a good example! Love, hugs, & prayers 💙🙏 Thinking of you Nan😘

What a nice man and a wonderful family. You will be in my thoughts and prayers as you walk the path of grief. May you experience the presence of the Lord Jesus in your time of loss.

My thoughts and prayers are with the family at this time. Ken was such a kind— caring man—— will certainly be missed by all who knew him.

Denise and Russell and David

We will miss you Ken. Such a kind man. Norma will hold you and the family in our prayers. My mom and dad loved getting together with you both. God bless!

Sending prayers for God's comfort and strength for you all during this time of sorrow. I remember hearing about the barber on the corner my whole life. Mr. Clarner was a great part of our community!

God Bless the family in their grieving. God blessing for all.

Norma and family I am so sad to hear the news. Ken and i spoke on the phone a few months back. I'm so glad for that call. I wish I could be there but I am in the hospital recovering from a few surgeries I pray Gods grace be upon you and I am so proud to have driven you all on so many journeys.

So sorry for your loss. Ken will be greatly missed. He was such a sweet man. Prayers to the family.

Jodi & Brian..... So very sorry for your loss. He will be missed but it sounds like he really enjoyed life! You were blessed. Thinking of you. Kristy, Karl and family

Our friendship with Ken and Norma and family is one of the highlights of our life. The church fellowship with the memories of Ken will be missed by his many friends. Our sincere condolences to his family.

Here's hoping everyone else is doing good. My thoughts and prayers are for you all. Ken was such a wonderful guy. I keep thinking about him and Norma.

I was so very sorry to hear of Kens passim. He was always full of joy. I counted it a privilege to know him. I pray that the peace of knowing he is with Jesus will be a comfort to you! Alice

So very sorry for your loss. My thoughts and prayers go out to the Family.

So sorry for your loss Heidi and Roger.

Praying for the Lord's peace for the family during this time of grief.

Ken was a great guy and friend. He will be missed dearly. RIP Ken.

Matt, Jeanie, Will and Emma Lehman