Memorial donations are suggested to Union Grove Baptist Camp or any charity of the donor’s choice and will be accepted through the funeral home. 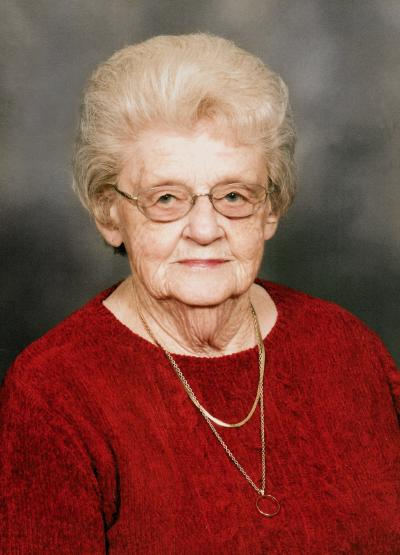 Visitation: 1-2 p.m. on Tuesday at the funeral home

She was born on July 22, 1922, to Herman and Eunice (Bumgarner) Bower and grew up near Xenia, where she spent most of her life.  On December 24, 1940, she married Dwight Rogers, and their marriage lasted more than six decades until his death in 2002.  Elizabeth lovingly worked with her husband on many endeavors through the years including on the family farm and as he served the US military and pastored numerous area General Baptist churches.  The two were members of the Pleasant Mound General Baptist Church of Xenia.

Elizabeth will be remembered by everyone who knew her as a loving, faithful, prayerful member of the community.  She was an excellent cook, serving for several years in the Xenia Grade School cafeteria and volunteering in the kitchen at church camps.  Among her culinary specialties were refrigerator pickles, pecan pie, chopped apple pie, and melt-in-your-mouth cinnamon rolls.  Elizabeth was a tremendous letter writer.  She enjoyed jigsaw puzzles and word searches and was forever faithful to her Bible study and daily devotions.

Friends and family were blessed to celebrate with Elizabeth and personally tell her of the great impact she'd made on their lives this past summer during a 100th birthday party at Heritage Woods.  It was a great day of smiles and laughter in celebration of a long, well-lived life.

Elizabeth was preceded in death by her parents; husband; a brother; and many friends and extended family members.

A funeral ceremony will be held at 2 p.m. on Tuesday, December 6, 2022, at Frank & Bright Funeral Home in Flora.  Interment will follow in Odd Fellows Cemetery, Xenia.  A visitation will be held from 1-2 p.m. on Tuesday at the funeral home.  Memorial donations are suggested to Union Grove Baptist Camp or any charity of the donor’s choice and will be accepted through the funeral home.  To share a condolence or memory, visit: www.frankandbright.com

Dan, Condolences to you and your family.

Prayers for all the family.

So sorry for your loss. Elizabeth was a wonderful Christian woman. Heaven gained an angel. Prayers of comfort for all the family and friends.

Jim, Danny, and Family, We are so sorry for your loss.

MR JIM DAN AMANDA THIS LAST YEAR HAS NOT BIN GOOD T0 YOU GUYS LOOSING A WIFE AND MOTHER BUT GOD PICKS SPECIAL ROSES FOR HIS HEAVENLY GARDEN AND YOU HAVE YOUR MEMORIES IF YOU NEED SOMEONE TO TALK TO JIM CALL ME.