Memorial donations are suggested to Clay City Volunteer Fire Department or Olney Baptist Association Church Camp and will be accepted through the funeral home. 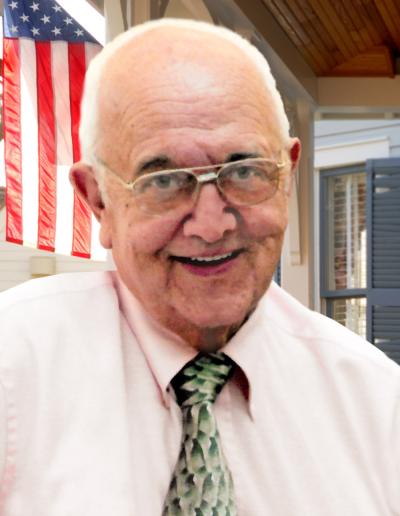 Visitation: 10 a.m. until 1 p.m. on Thursday at the funeral home

He was born August 29, 1933, in Louisville, the son of Harold and Marguarite (O’Dell) Hostettler.  He was united in marriage to Beulah Evelyn Hall on June 1, 1954, at the United Methodist Church in Clay City and together they shared 64 years of marriage until her death May 20, 2019.

Kenneth served in the U.S. Navy and traveled overseas.  He was the owner and operator of Kenny’s Appliance Store in Clay City for over 20 years.  He joined the Clay City Volunteer Fire Department in 1971, serving as the Department’s Chief for 16 years and serving as the District Chief for 25 years.  Kenny and Evelyn had been longtime members of Zif Baptist Church.  Kenny enjoyed fishing, camping, gardening, and bird watching.  He served as mayor of Clay City and on the Village Board, retired from driving a school bus, and spent countless hours running the Clay City Civics Association which coordinated the summer youth program and the Fall Festival.  He was an establishing member of the 911 board and served on the Clay County Housing Board.  He will truly be remembered for his genuine service to others and love that he shared with his family.

A funeral ceremony will be held at 1 p.m. Thursday, September 15, 2022, at Frank & Bright Funeral Home in Flora with Kelly Carruthers officiating.  Interment will follow in Clay City Cemetery with the presentation of military funeral honors as well as service honors by the Associated Fire Fighters of Illinois.  Visitation will be 10 a.m. until 1 p.m. on Thursday at the funeral home.  Memorial donations are suggested to Clay City Volunteer Fire Department or Olney Baptist Association Church Camp and will be accepted through the funeral home.  To share a condolence or memory, visit: www.frankandbright.com

Tim-Tracy-Tony & Gwen.... So sorry to hear about your dad. We have known your family for most of our life. Keep your heads high and make your parents proud in the days and weeks ahead. They will be looking over you all. Take care all!!

One of the best guys that I ever had the privilege to call my friend. Kenny never met a stranger. He had done SOOO much for Clay City as a village and the Clay City Volunteer Fire Dept. Kenny was one great man. I do and will forever cherish my time with him. My thoughts and prayers are with the family.

So sorry for your loss. He was a nice guy. I was one of his m.o.w. delivery ppl.

THIS GUY WILL BE MISSED BY MANY I HAVE KNOW ALL THE FAMLY FOR YEARS HOME SIDE AND FIRE SIDE I REMEMBER BEING YOUNG IN THE RESCUE AND I LOOKED UP AFTER I RUN OUT OD IDEAS AND THERE WAS KENNY AND I ASK HIM AND HE SAID YOU HAVE DONE GOOD AND YOU HAVE DONE ABOUT EVERY THING I WOULD HAVE THEN WE COME UP WITH A PLAIN. KENNY WAS ALL HEART AND HELP WHEN IT COME TO OTHERS EVEN IF HE SOLD YOU A STOVE OR FREG, SOEVERYONE COME AND SUPPORT HIM AS HE WOULD HAVE DOWN FOR YOU .

Kenneth was so good to my mother and father. He was just a great person! He would do anything for people and his community. He will be greatly missed. My thoughts are with the family.

To the Hostettler family, we are so very sorry for your loss. Always enjoyed visiting with Kenny, he would always give me the dickens. He had a great sense of humor. He loved helping the kiddos of Clay City have summer sports, Christmas enjoyment and was a great bus driver. Kenny and Evelyn loved their family to the max. RIP to a good man.

A cousin I remember as far back as my memory goes - always fun to be around. See you inside the pearly gates one day, Kenny! My sincere condolences to the family and prayers for the Lord’s comfort.

We are so sorry to hear this. Our thoughts and prayers are with you all!

Very sorry for your loss .

Sorry to here the loss of your father, Tim. It’s hard loosing a parent. But you having memories to cherish for life! Our deepest sympathy to you and the family!

What great neibors Kenny and Evelyn were my whole childhood with Gwen being my best friend our dad's loved to garden and had great competitions Gwen and boys will miss u you were a truly great person for our town country and community RIP may God be with you all as u say goodbye!!

So sorry for the loss of your loved one. Memories are a blessing and will help you deal with the loss of a dear family member. Kenny was so important to the community and to your family

Tim and family. Heartfelt sympathy from Dennis and I to all of you. Our families go back to my Daddy and Elmer. Can’t remember when I didn’t know you guys. Prayers for peace at this time.

Kim, Tim, Cortina and family, I am so sorry for your loss. It is always to soon to lose your dad and grandpa. He was such a kind man!

We are so very sorry about your loss and the loss to the community in the passing of your father!!Prayers and condolences for the family!!!

What a gathering there is in heaven! I will miss my cousin. It was always a pleasure to talk to him. He had story upon story about our family.

Kenny was a good man I remember him well..He was just a little older than my Dad..My Dad new Kenny a long time even bought a truck from him years ago.He will be missed I pray Lord you will give all of his family a piece at this time..

When our furnace went out on a cold (below zero) winter night about 10:30 in our rented trailer when we were first married, the landlord called Kenny. He knocked on the door 5 minutes later and fixed the furnace. He was that type of individual. Condolences to the family. May he rest in peace!

So sorry for your loss. Kenny was so very kind.

Sorry for your loss prayers for all of the family

Always had alot of respect for this man!

Tony and family so sorry to hear of the loss of your father, our thoughts and prayers are with you all

Thoughts and prayers to you all. I'm sorry to hear of your loss. 🙏🏼

We are sorry for your loss of Kenny, 0ur prayers and thoughts are with you all to day and in the days to come. Being a Wattles from home I (Freda) have known your family over the years, a special family. Prayers!!

To Tony, Jan and Kenny’s entire Family, We want to express our deepest sympathy to you all. May God bless you and comfort you during your time of grieving. 🙏🏻❤️

So very to all family and friends. Thinking of you at this difficult time.