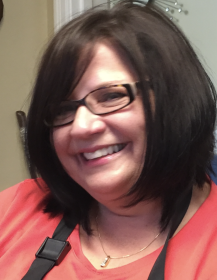 This is a courtesy obituary placement by request.

Nancy Ann Eckelberry, age 62, of  Hillsdale, MI,  was called to her eternal home, surrounded by family on October 21, 2021. Born on May 27, 1959, in Alpena, MI, she was the fourth of six children born to Thomas and Dorothy Beaudrie. She grew up in Newberry, MI, and always spoke fondly of her childhood, sharing many stories of growing up in her large family. After graduating, Nancy became a licensed cosmetologist in Mt. Pleasant, MI, where she met her husband, Jerry. They married on November 20, 1981, and raised their family in Hillsdale, MI, where they have resided for the past 24 years. Nancy was a devoted wife, mother, nana, sister, and aunt. Passionate about her faith, family, friends, and career as a hairstylist, Nancy formed many relationships within her community. While raising her three children, Nancy was involved with the schools and a member of the Free Methodist Church, which lead to her creating lifelong friendships many of whom sat in her chair to have their hair done. Among her many talents was her gift of caring and her strength as a prayer warrior. Often family and friends who were struggling would reach out to her for prayers. Nancy was a light to anyone she touched and will be greatly missed by all who knew her. Nancy was predeceased by her parents Thomas and Dorothy Beaudrie. She is survived by her husband Jerry; sons Brandon and Jason (Tracey) Eckelberry; daughter Sarah (Chad) Meyer; grandchildren Rylie, Draydon, Nathan, and Lincoln; and great-granddaughter Hazel. In addition, she is survived by siblings John (Matilda) Beaudrie; Diane (Marv) DeMilio; Susan Wellman; Deb (Jeff) Stieve; and Kathryn (Paul) Walters, along with many nieces, nephews, great nieces and nephews, cousins, and friends. Funeral services will be privately held with family. A celebration of life for friends and family will be announced at a later date. In lieu of flowers, memorial contributions may be made to Nancy’s family for final expenses.

Our thoughts and prayers are with your family.

So sorry for your loss. Heaven gained another angel

I am so sorry to hear about Nancy. She was my hairstylist for over 20 years. I truly loved her and will greatly miss her. Prayers for your family.