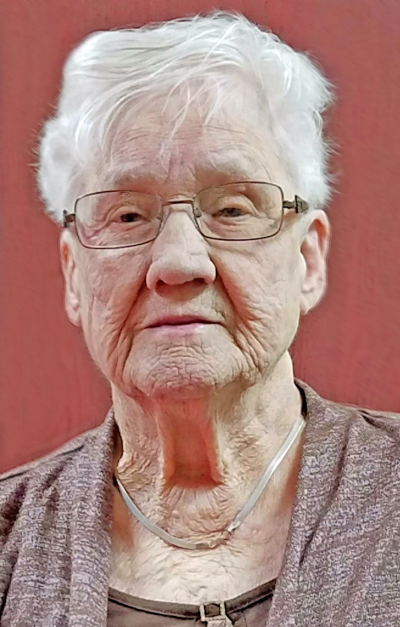 Memorial Visitation: 1-2 p.m. on Saturday at the funeral home

All are welcome to attend and share in remembering their lives with laughter and love.

Mary Jo Harvey was born February 17, 1931, in Mt. Pleasant, Michigan.  She was the 7th of 8 children born to Arthur D. and Minnie Agnes (McCrary) Childs.   Her father died when she was very young (9), and she always contended she was his favorite of the eight children.

Mary Jo spent her childhood in Mt. Pleasant, helping her mother tend to a downtown apartment building by running the “scary” elevator and playing on old fire escapes.  She graduated from high school in Mt. Pleasant in 1949, and a few years later met Mark S. Harvey after his mother told him to “come see the cute girl playing piano at church.”  Their first date was July 4, 1951, and they were married in Mt. Pleasant on April 11, 1952.

Shortly thereafter, Mark was drafted into the Army and the couple moved to Fort Knox, KY, for basic training.  Mark was then stationed in Germany, and Mary Jo moved back to Michigan and lived with her in-laws.  While Mark was overseas, Mary Jo welcomed their first daughter, Shara Rae, in April, 1953, in Mt. Pleasant.

When Mark returned from his Army service in 1954, he began working for Halliburton and was transferred to Flora, IL.  The two lived there for 30 years, and welcomed three more children:  Marjorie Lee (April, 1955), Jeffery Dee (February, 1960), and Joni Louise (October, 1966).  During their time in Flora, Mary Jo had several jobs, including working for Sears, ordering customer’s items from the catalogue; and also, the Ford dealership, where she helped manage the Ford Town USA event (she would tell you only two people didn’t turn their keys back in on time!).  Mark and Mary Jo attended both the First Christian and First Baptist Churches in Flora.  Most recently, they attended New Beginnings Church in Flora.

In 1971, after Mark retired from Halliburton, the couple bought the Ranch Motel in Flora, selling it in 1978 and purchasing the Ice Cream Round-Up in Louisville.  In the mid-80s, they moved to Amarillo, TX, and managed apartment complexes, then “retired” by moving into a 5th wheel and helping manage RV parks while traveling out west.  They loved the RV lifestyle, the southwest, and frequently ended up back in Texas, their favorite state.  In 2000, Mark and Mary Jo “officially retired” and settled down, once again in Flora, where their roots now go back over 50 years.

Mary Jo – also called “JoJo” and “Joge” by her family - was known for many things, but especially for staying busy, keeping things tidy, and cleaning.  She always had laundry going and would run the vacuum at all hours of the day.  Her kids joke that she would sell anything at a garage sale for a quarter, and you could never leave anything just “laying around” – it would end up for sale, in the trash, or in the laundry.  She loved to make desserts – pies, cakes, brownies – but shunned vegetables.  She beautifully played piano by ear, playing for First Baptist Church throughout the years.  Mary Jo loved watching sports - especially baseball and her very favorite St. Louis Cardinals (she consulted their schedule on her clipboard until she couldn’t!).  She was a long-time St. Jude’s Children’s Hospital supporter, loved the color purple, and to her, there was no such thing as too much glitter and sparkle.

Most of all, Mary Jo loved her family – God, her husband, her kids, their kids, and their kids.  In April, 2021, Mark and Mary Jo celebrated 69 years of marriage, an extraordinary milestone.

Mary Jo passed on at Heritage Woods in Flora after a brief battle with cancer, surrounded by those who loved her, on May 13, 2021.  She was 90 years old.

A Celebration of Life for Mark and Mary Jo Harvey will be held Saturday, May 7, at Frank & Bright Funeral Home from 1-2pm, with a service following at 2pm.  All are welcome to attend and share in remembering their lives with laughter and love.  Following the memorial service there will be a burial with military rights at Elmwood Cemetery.

So sorry to hear this. We will be praying for all of you.

We are so sorry for your loss. Prayers for the family.

Shara and Jeff, We are saddened to hear of your mother's passing. It so very hard to lose them but, know God allowed you many years sharing in her life. She now no longer has to bare the pain she surely endured in this life and is now in the hands of our Lord and Master. May she rest in everlasting peace. You are in our thoughts and prayers.

Shara, Amy, and rest of the family my prayers go out to all of you. May God wrap his arms around you.

So sorry for your pain. But don't worry Mom will greet her at the gate.

My condolences go out to family and friends of Mary Jo, she will be greatly missed.

I’m so sorry dear friends. We share so many good memories as neighbors and friends. Somehow it seems fitting that she will rest next to her old neighbors, who loved her. My condolences to Harv , Shara, Margie, Joni, Jeff, all the grandkids and great grand son.

Dear Harvey Family, Hugs and prayers to you all for the loss of your sweet wife, mom, and grandma. God has already given you comfort by knowing that she’s now dancing with angels.

We’r sorry for your loss, Prayers, & Thoughts are with you!

Our sincere sympathies to all of your family. We understand the hard times and pray God gives you peace!

Sadden by Joge’s passing in this world but rejoicing for her new pain free blessed life above. I’m betting she and Judy O have already arranged a bingo game or some fun activity. Prayers of comfort and peace for all of you.

Mark and Mary Jo attended Judy and I wedding January 5 1969. it was very much appreciated.

Thoughts and prayers are with the family!

We're so sorry for you loss. Sending thoughts and prayers out to the family.

We are so sorry for your loss. She will be truly missed.

We are saddened to hear of Mary Jo's passing and share your sorrow. You are all blessed with the wonderful memories she has left with you as treasures. One day those thoughts will help you to smile and keep the tears at bay. our thoughts and prayers are with you.

Sorry for your loss. You were blessed to have had her for so long.

Mary Jo was a "Halliburton Wife" friend to me, Jean, and we shared many hours worrying about our husbands out on long, dangerous, Halliburton jobs. May God comfort her family,

Mark & family I am so sorry for your loss. Sending hugs & prayers!!

Beautiful testimony of faithful love and service to God and family. Thank you for sharing Margie.

So sorry for your loss. My thoughts and prayers are with the family at this difficult time.

Shara, Jeff, Marjie and Joni and families, so sorry for your loss. I never got to know your Mom well, but what an interesting and fulfilling life she seems to have had. May God provide you comfort and peace in the coming days, weeks and months.

So sorry, my sincere sympathy to all her family. Remembering fun times we had through the years!

So sorry to hear of Mary Jo’s passing. Have so many memories of fun times spent with her and Harve. I’m keeping her family in my prayers.

I have so many fond memories of your mom, growing up next door...❤ also your Mom was a very good friend to my Mom and Dad. My deepest sympathy for the loss of your Mom...🙏

so sorry for the lost of JoJo. She was a wonder person. GOD needed some body to help her make those pies. She will be missed. You all will be in our thoughts and prayers

I am really sad to hear this. Prayers of God’s comfort to the family.

So sorry for your loss. Prayers to the family!

Mary Jo was one of my favorite Aunts. I spent a lot of time at their home when I was growing up. She sure will be missed. So sorry for the lose to all of her family. I know she will be greatly missed. To know that she is in the arms of Jesus will bring such comfort, I know you have many memories to keep and treasure.

We are sorry to hear about your mother. We are thinking of you and heartfelt condolences to you and your family.