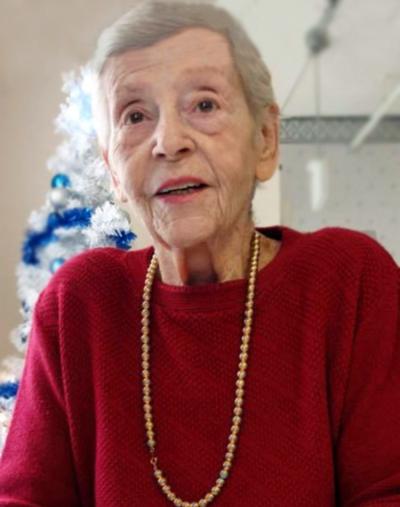 She was born July 6, 1932, in Flora, the daughter of Earl Lee and Flossie Pearl (Franklin) Monical.  She was united in marriage to Dale L. Blair and together they shared over 50 years of marriage.  He preceded her in death on September 15, 2000.

Bonnie enjoyed time spent outdoors and fishing, mushroom hunting, and riding motorcycles.  She was a seasoned member of the bowling league and had bowled several 300 games.  Bonnie was a restaurant waitress, worked as a hairdresser for 33 years, and was co-owner of Blair’s Used Cars.  She will be remembered as a fantastic cook and for her loving relationship with her nieces and nephews.

A graveside memorial ceremony will be held 11 a.m. Friday, October 23, 2020, at Clay City Cemetery.  Those attending are asked to go directly to the cemetery.  Arrangements are in the care of Frank & Bright Funeral Home in Flora.  To share a memory or condolence visit: www.frankandbright.com

When I was young Bonnie's beauty shop was the first shop I went to. She cut my hair just the way I describe how I wanted it .She was a nice lady.

So sorry for your loss. A woman who will be remembered with her kindness and beautiful smile...RIP my wonderful friend

I will always remember Bonnie as a kind and positive lady. I'll never forget while at her beauty shop in my younger years that she treated me to my first deluxe hamburger from Sunday's Ice Cream Parlor in Clay City.

I'M SO SORRY FOR THE LOSS OF BONNIE...MY THOUGHTS AND PRAYERS ARE WITH THE FAMILY...

Bonnie was a wonderful lady. We enjoyed her when she attended our Sunday Services. Our prayers are with her family.

Bonnie worked for my Mother in our cafe in Clay City. She was a wonderful person and fun to be around!!!

So sorry to hear of Bonnie's death. I will always remember her as being such a nice person and being in Billie's Cafe every morning. Prayers for her family and friends.