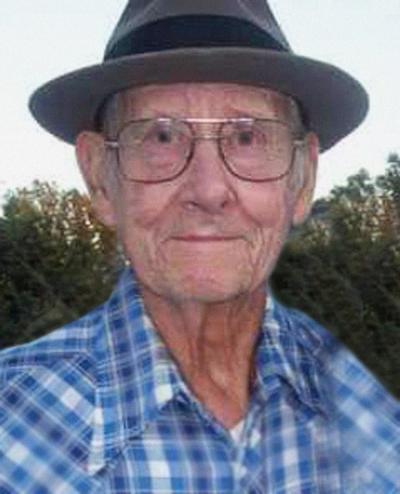 Visitation: 6-8 p.m. Saturday evening, March 7, and 1 p.m. until time of service on Sunday at the funeral home

Pinkney served in the US Army during World War II and was stationed in Berlin when it was bombed, though he did not speak of this often.  He also served in the Korean War and was in the Police Action in Germany.  He was an oilfield worker for Shelby Britton, Strickland Oil, and Tally Well Service for several years and also worked as a Union construction worker.  For many years he served as the campground host and operated the concession and bait shop at Forbes State Park.  Pinkney loved playing cards, especially pinochle with the club, and poker on the holidays.  He also greatly enjoyed hunting, fishing, trapping, playing horseshoes, and anything to do with the outdoors and shared this love with his family and friends.  Pinkney loved his kids, grandkids, great-grandkids, nieces, nephews, and other close family and friends with all of his heart and soul.  He will be deeply missed by all of them and they will cherish the memories they have of him.

He is survived by his sons: Tony (Lois) Fulk of Flora, Pinkney Franklin Fulk of Flora, Larry (Peggy) Pierce of LeBlanc, LA; daughters: Dianne Misselbrook of Flora, Kathy Schoonover of Effingham, Linda (Charlie) Bosley of Toledo, Margie (Terry) Moore of Louisville, Cindy (Roger) Cook of Flora, Lois Dean Martin of Louisville, Lisa Fulk (Lenny Thoele) of Montrose, and Mary Stevens of Owensboro, KY; sister-in-law: Betty Reed of Springfield; several grandchildren, along with one very special granddaughter and caretaker who would do anything he asked and who saved his life from his house fire: Diona (Andy) Griffy; and several great-grandchildren, nieces, and nephews also survive, along with his dog Chevy.

A funeral service will be held at 2 p.m. Sunday, March 8, 2020, at Frank & Bright Funeral Home in Flora.  Interment will follow in Old Union Cemetery with the presentation of military funeral honors.  Visitation will be 6-8 p.m. Saturday evening, March 7, and 1 p.m. until time of service on Sunday at the funeral home.  Memorial donations are suggested to the family to assist with final expenses and will be accepted through the funeral home.   To share a memory or condolence visit: www.frankandbright.com

sorry for your loss prayers for the family

Hugs and prayers Cindy and family

Condolences to the family! Prayers!

So sorry for your loss,always enjoyed seeing him at Julian’s.

I'm so sorry to hear of our family friend for as long as I can remember passing. My Mother and Pinky went to school together and were friends forever and were also neighbors in their last few years until Mama's passing in 2016. My condolences to all of Pinky's family, he will be missed by many God Bless you all!

Sorry for your loss prayers for the family for healing

Prayers to all the family and friends. Pinky was a great man. He will be missed by many.

So very sorry for your loss! Praying that God blesses you with His comfort!!

Dianne n family, So, sorry for your loss! He was quite the character! Receive those memories, n smile. That's what he would love best. Condolences to all.

So sorry for your loss. Please know we will be praying for your family.

So sorry for you loss. Sending prayers to all. May God be with you in you time of sorrow and healing.

My condolences to Lisa and the rest of the family. You are in our thoughts and prayers .

Pinky was one of the best people on the planet that i ever had the pleasure of meeting. He is gone now but he will live on in the hearts of anyone that ever new him. One fantastic human being.

To the Fulk family (John Fulk) my deepest sympathies are with you today, as well as love and prayers. May you receive peace and comfort during this time. Much love

So very sorry for your loss my thoughts and prayers go out to the family.

With sincere sympathy to the entire family on the passing of your loved one. Many Prayers.

Sending lots of love and prayers to the family. He was a great friend to our family for many years and especially my Mother. He always had a big hug for me when I came down to visit my Mother. He was truly one of a kind. He will be missed.

Thete will NEVER be another Pink! He will be missed but NEVER forgotten. Will keepuoi on thoughts/prayers

Our deepest condolences to Pinky's family. We have only met on a couple occasions, but he seemed to be very full of life and a very happy soul. Love & Prayers to all. Love, the Foutch family

So sorry for your loss, you are in our thoughts and prayers

rest in peace pinky, what a great man, he will be missed by so many folks that truley loved him, may god bless all his family in this time of need.

Our sincerest condolences to your family. I know most of the family and im sure he will be missed by all of you. God be with you in this difficult time.

Thoughts and Prayers for Family . So sorry for your loss .

Sincere sympathy for your loss. Prayers for God’s comfort at this very difficult time.

Memories of your grandfather will comfort you for ever.

Adara and all of his family; my prayers are with you.

Had a lots fun over the years. Sorry for your loss. He has already caught a mess of catch fish in heaven.!!

CONDOLENCES TO ALL THE FAMILY.

I remember when he and my great grandpa Dale Pulliam used to fish together every day. Those two were always having a great time together. I remember sitting by the campfire at the lake listening to the stories. Sorry for your loss.